State of Moving in 2020: Moving Stats and the Impact of COVID-19

Pandemic concerns, changes in income and employment status, and evictions prompted many Americans to move around in 2020. In our latest survey, we gained more insight into how moving related to COVID-19’s impact.

As of September, 20% of survey respondents moved this year.1 Of those who moved, 33% say they weren’t planning to move this year, and 45% said their move was a result of COVID-19.2

Let’s dig into details about who moved, where they moved to and from, why they moved, and when moving peaked in 2020.

Top states where people moved to and from

Many of the states that people left were the same states others moved to the most, except New Jersey, Pennsylvania, and Virginia, which didn’t receive enough new residents to make the top ten. 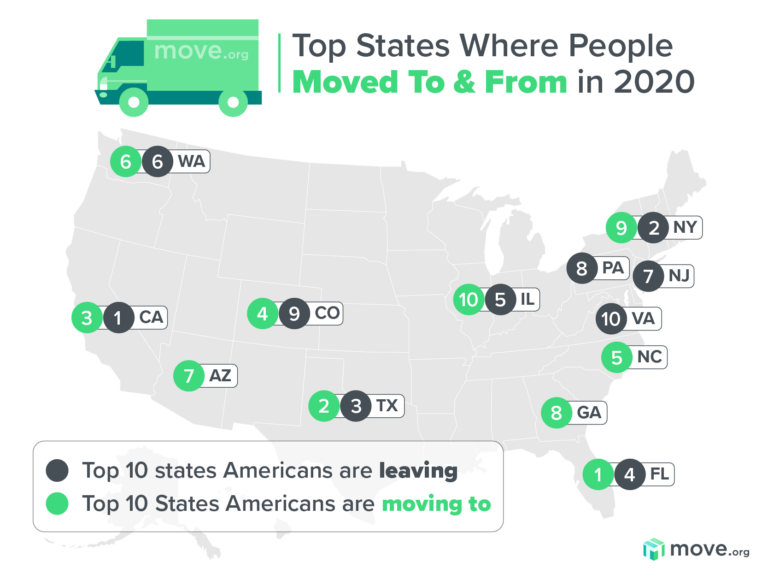 But most folks who moved homes didn’t necessarily search too far for greener pastures.

Where did people move?

Most of our survey respondents stayed within the same city and state, but 14% went beyond their state line to find a new home.

People chose to move locally for different reasons—close proximity to friends and family, the comfort of “home,” job security, or costs of long-distance moving. Whether the move was local or long distance, we wanted to know: what reasons did people have for moving in the first place?

The most moved to state in 2020 was Florida, followed by Texas, California, and Colorado.

Why did people move? 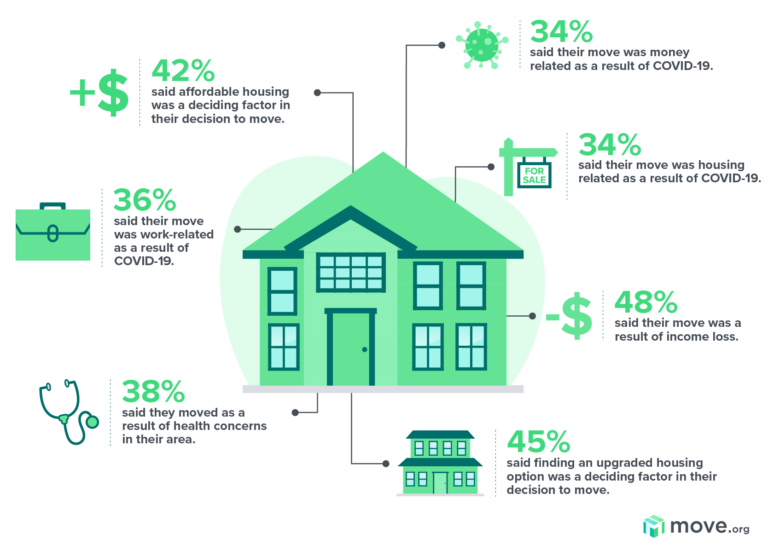 The US Census Bureau reports a national housing insecurity average of 7.9%, with some states and metro areas having upwards of 15% or more during the pandemic.3 As of this writing, there is a federally mandated eviction moratorium lasting until December 31, 2020, but there are reports of an extension until February, 2021.4

The situation’s economic uncertainty stirred up a lot of movement, but it wasn’t the only factor.

Moving in 2020: Renting vs. Homeownership

With 45% of survey respondents saying upgraded housing was a moving factor, the economic dynamics paint a mixed picture between renters and homeowners. 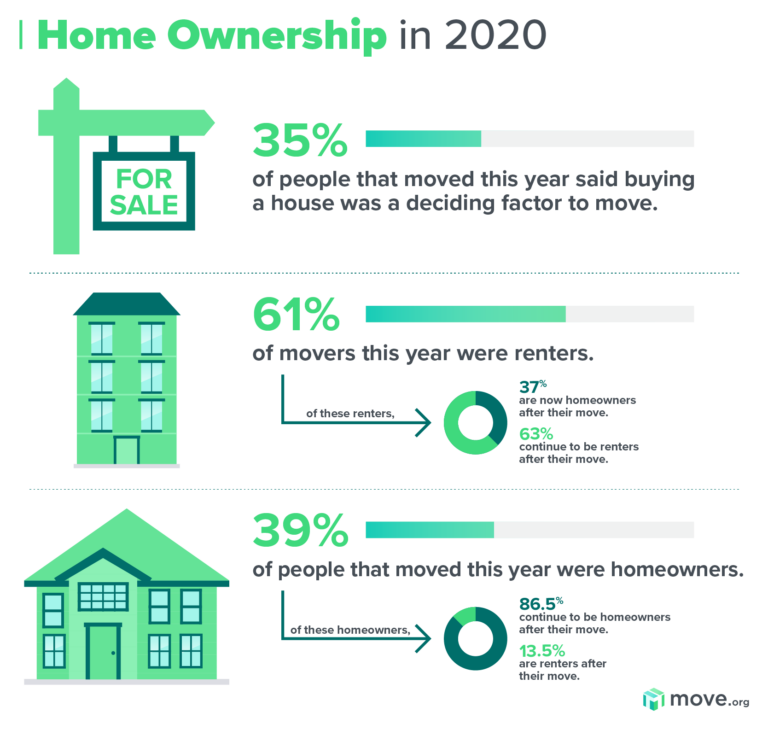 To gain more insight on respondents’ demographics, we looked at their age, who they lived with, and their housing. Here’s what we learned.

Demographics of people who moved in 2020 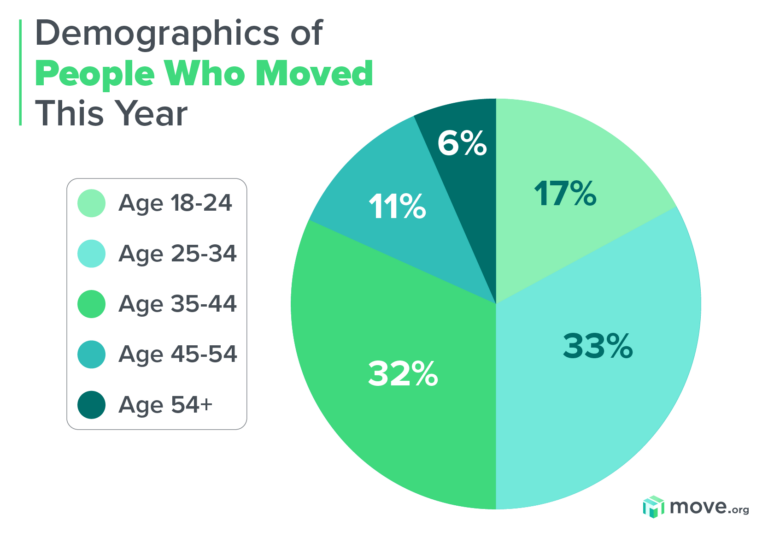 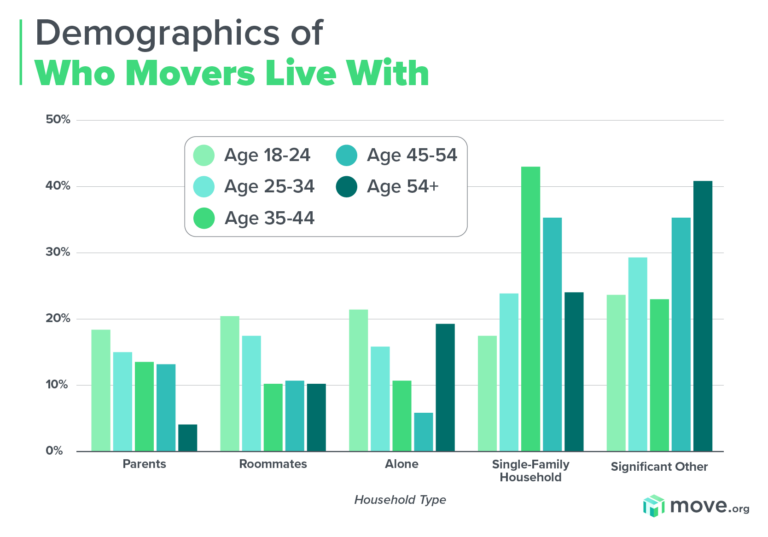 Who moved based on housing type 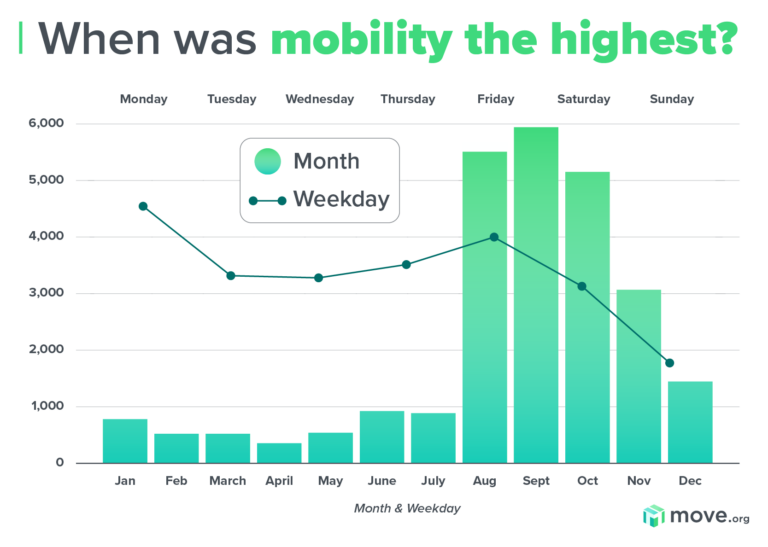 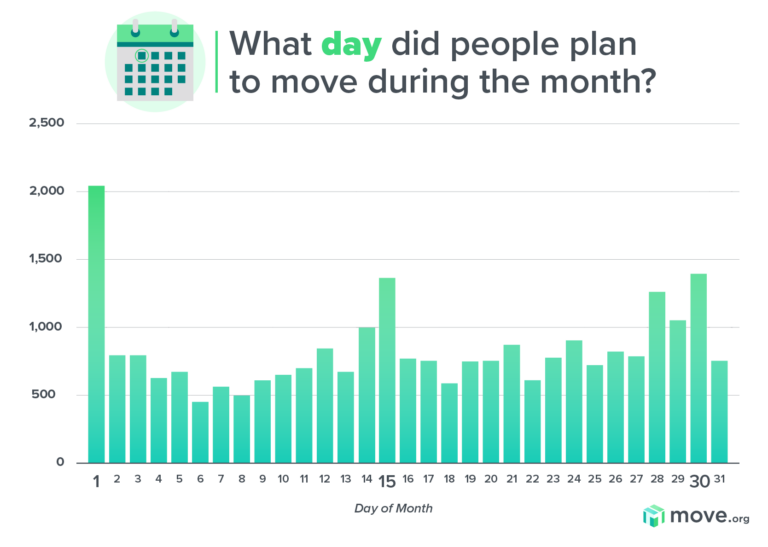 We can’t be sure of the full impact of COVID-19 just yet, but based on our findings, it’s clear that it was a disruptive year that resulted in many folks changing residences—be it for health or economic concerns or as an opportunity to start somewhere fresh.

Moving is stressful as it is, let alone during a global pandemic. Whether you’ve been planning to move for a long time or it’s coming as a surprise, we can help you take some of the stress off. Visit our comprehensive guides to learn more:

We used proprietary data from our top partners to gather information about where people were moving to and from along with when their move occurred. We also conducted a Pollfish survey of 700 Americans 18+ to understand more about their 2020 move.