The Best and Worst US Cities for Job Seekers 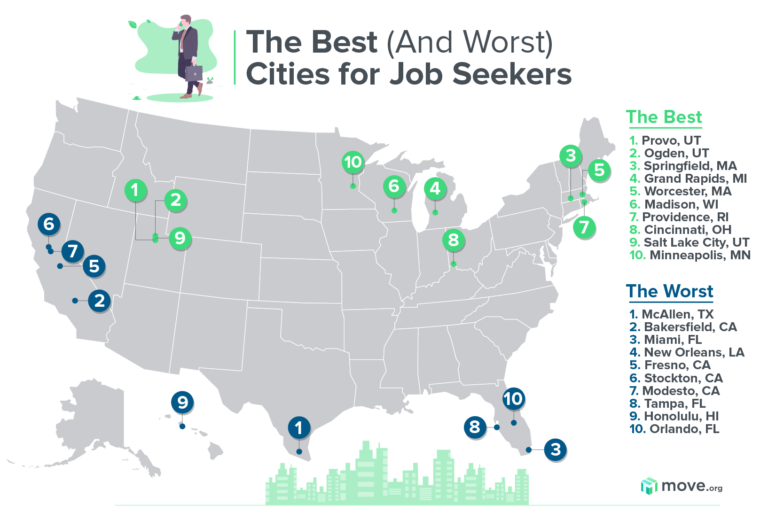 Whether you’re about to graduate college or are hoping to succeed Jeff Bezos at Amazon, you want your next job to be as perfect as possible. With luck, companies will be fighting over you and offering a list of attractive perks ranging from company cars to gym memberships.

But there’s more to a job than the job itself. You also need to think about where the job is.

It’s going to be tough to find a gig if a city has an unemployment rate double the national average. Similarly, it’s a problem if jobs are a dime a dozen but the median household income feels like pennies on the dollar compared to other cities.

Move.org did some digging and put together a list of the best and worst cities for job seekers.

Check out our Best Moving Companies of 2021 guide that our moving experts put together after researching professional moving companies across the country to determine the ones that can make your long-distance move the most organized, easy, and stress-free as can be.

What are the best and worst US cities for job seekers?

Best US cities for job seekers

Worst US cities for job seekers

What makes a city attractive to job seekers?

Everyone likes a big paycheck, but there’s more to a job than money. Move.org looked at several variables to identify the best and worst cities for job seekers:

Each city was then given a weighted score for each category with a total of 100 possible points. The results range from 29.1 (McAllen, TX) to 95.3 (Provo, UT).

What are the best US cities for job seekers?

Provo is one of the few cities on our list with an unemployment rate of less than 2%. While virtually everyone who wants a job has one, workers also put in an average of only 34.9 hours per week. It also ranks in the top 100 for median income, with an annual amount of $70,179.

Provo gets our top ranking with a score of 95.3 out of 100—about 15 points higher than the next-best city on our list.

Ogden is home to the George S. Eccles Dinosaur Park, but the city is no fossil when it comes to a living wage. Ogden easily lands in the top 10 cities with a median income of $71,866.

Ogdenites work 37.5 hours per week while paying only $933 for rent—a mere 15.6% of income. And the city’s 2% unemployment rate is one of the lowest in the nation.

You’ll have plenty of time to visit the Naismith Memorial Basketball Hall of Fame if you decide to move to Springfield: the average worker puts in only 36.3 hours per week.

Springfield’s 2.9% unemployment rate aligns with the Massachusetts average of 2.8%—the twelfth lowest in the nation.

Grand Rapids is the second-largest city in Michigan, but there’s nothing big about its median rent of $860.

Rent as a percentage of income comes in at 16.9%—or the same as Provo, our number one city. Not a bad thing to have in common.

The residents of Worcester’s Hope Cemetery, founded in 1852, have long since passed away, but you can live it up with a median household income of $70,716—the second-highest number on our list.

Unlike cities where rent takes up more than 30% of everything you bring in, Worcester residents allocate only 17.2% of household income for housing.

Wisconsin is known for its cheese, but there’s nothing cheesy about Madison’s low 2.3% unemployment rate.

Residents have a healthy median household income of $69,372 and a median rent of only $996.

Providence is home to the world’s biggest bug—a 58-foot tall blue termite on top of the New England Pest Control building. But there’s nothing big about the 37.6 hours workers put in each week—or the 3.2% unemployment rate.

Providence workers also contribute only 17.7% of income towards rent, a figure that is well below the 30% benchmark.

Neil Armstrong, the first person to walk on the moon, called Ohio home—and he passed away in Cincinnati. The low rent prices in the Queen City are out of this world too.

Median household rent prices come in at just $817. Even more impressive is the fact rent takes up less than 16% of the average household income.

Professional athletes don’t like to play the Utah Jazz in Salt Lake City because of the altitude. While the elevation is high, the unemployment rate is about as low as you can go.

Minneapolis is known for cold winters—and a relatively high median household income of $76,870.

Plus, residents pay only 16.4% of household income toward rent and work less than 40 hours per week.

What are the worst US cities for job seekers?

People say everything is bigger in Texas. From 10-gallon cowboy hats to high school football stadiums that regularly fill over 10,000 seats, the state has a reputation for big things—including unemployment rates.

McAllen has an unemployment rate of 7.0%. That’s more than four times higher than the number one city on our list. For those that do have jobs, the median household income is only $38,398—the third-worst of any city on our list.

The Bakersfield Museum of Art is home to some of the finest works of California artists, but there’s nothing appealing about the city’s 7.2% unemployment rate.

Workers can expect to pay more than $950 per month for rent. That might not sound too bad until you compare it to the median household income of $52,479. At the end of the month, residents put nearly 22% of everything they earn toward rent.

While that’s still below a universal benchmark of 30%, it pales in comparison to cities like Ogden and Cincinnati that have rates lower than 16%.

Burn Notice’s Michael Westen was a nightmare for fictional bad guys in Miami, but the city’s real housing prices will make you feel like you’re in a bad dream of your own.

New Orleans is known as the “Big Easy,” but finding a job there is anything but easy with a 4.4% unemployment rate.

More than a fifth of the median household income goes toward rent, and workers average almost a full 40-hour workweek.

The Fresno Chaffee Zoo has an exotic stingray touch pool, but you don’t have to buy tickets to feel the pain.

The median household income is only $51,261 in a state known for its high cost of living. Fresno also has a scary unemployment rate of nearly 7%.

The Children’s Museum of Stockton has some fun hands-on exhibits for your kids to enjoy, but you’ll probably need the babysitter to take them to the museum for you.

Stockton residents work an average of 38.4 hours per week—or 3.5 more hours than our top-ranked city.

Modesto is the hometown of George Lucas, the filmmaker known for hits such as Indiana Jones, Star Wars, and American Graffiti.

It’s also the place to go for astronomical housing costs. The average household rent in Modesto is only a dollar short of $1,100, and the unemployment rate is an unpleasant 5.6%.

Tampa is home to the Busch Gardens amusement park. And it’s a good thing—workers in the city need a distraction from real life.

Tampa employees average 39.1 hours at work each week only to write a rent check for nearly a quarter of their income.

Hawaii is where a lot of people go to get away from the stress of real life, but workers in Honolulu have stresses of their own.

Orlando is home to the Wizarding World of Harry Potter, the amusement park that brings to life magical adventures from the imagination of J. K. Rowling.

It’s also the place you go for a less-than-magical combination of low income and high rent. Orlandoans pay $1,161 for housing, but the median household income is only $55,095. More than 25 cents out of every dollar goes toward rent.

All scores are rounded to the nearest tenth for readability, meaning there are a few cases where cities appear to be tied. In these instances, the numerical ranking signifies that the tiebreaker is broken by examining the nonrounded scores.

We considered only cities with populations of at least 500,000. Other criteria, such as local entertainment options, average temperature, and job satisfaction statistics were not used as ranking factors.

Written by
Kurt Manwaring
Kurt Manwaring brings nearly a decade’s worth of research experience as a business consultant to the Move.org team. He specializes in taking complicated issues (like moving) and presenting them in a way that everyone can understand. His writing has been featured in hundreds of publications, including USA Today, Martha Stewart Living, Country Living, Good Housekeeping, Heavy, Slate, and Yahoo! Lifestyle. He brings a BS in sociology and an MPA (masters of public administration) to the Move team. He would love to hear about your moving experiences and questions at kurt@move.org.
Read More