The Best Places for Women to Live in 2019 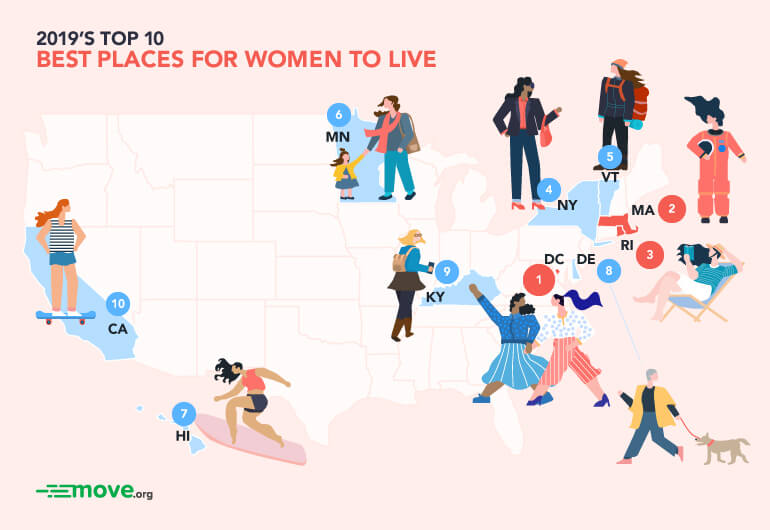 Who runs the world?

The more than 167 million women in the United States1 are dominating professions like accounting and legal services, and a record ninety-eight won their 2018 House races for a seat in Congress.2 Plus, the share of women who are rocking motherhood increased 6% between 2006 and 2016.3

We think Beyoncé is on to something.

We wanted to know which places are most conducive to women's success, safety, and happiness, so we put our heads together to analyze the stats on all fifty states plus Washington, DC.

Some states proved to be more women-friendly than others with greater access to healthcare and lower crime rates. Other states, with high rates of uninsured women or broader wage gaps, fell short.

Read on to see the states that ranked best (and worst) for women to settle down in.

To determine which states have the best cities for women to live, we considered factors that make a place desirable for anyone—regardless of gender—such as overall safety and housing costs.

We also analyzed stats specific to women, such as the percentage of women who are uninsured in each state and the average amount a woman makes to a man’s dollar.

In total, we looked at seven factors:

The top 10 places best for women to live

Washington, DC is one of the top US cities for workplace opportunity,11 and women in DC make $0.89 to every dollar a man makes. It’s not perfect, but it’s a smaller gap than almost every official US state.

Plus, only 3.2% of women in DC are uninsured, which is one of the lowest percentages on our list—and city legislators have unanimously supported laws on pregnancy accommodations in the workplace.12

If you can handle humid summers, politics, and lots of tourists, it’s worth considering a move to the nation’s capital—whether you’re a working professional, an expectant mom, or both.

Massachusetts is the first of several New England states to make the cut for top women-friendly states.

With a 2.9% uninsured rate—the lowest percentage in the country—Massachusetts provides accessible healthcare for women.

Plus, with ninety-five post-secondary schools to brag about, Massachusetts offers plenty of opportunities for women to learn and advance in their careers—just ask Elle Woods.

Best cities for women to live in Massachusetts

Clearly, the Northeast leads the charge when it comes to progressive, women-friendly efforts.

For example, Rhode Island (the smallest state in the US) boasts an equally small yet highly impressive uninsured rate of 5.1%. While its wage gap of $0.84 isn’t the best on our list, it sure beats some of the lower-ranking states whose gaps are in the $0.70s.

Best cities for women to live in Rhode Island

The Empire State—and its concrete jungle—are where dreams are made. (Just ask Jay-Z and Alicia Keys.) It’s also a great place for women to put down roots.

With a wage gap of $0.88—the second best of any state—New York is taking the right steps forward equality-wise.

While no one is immune to New York’s sky-high housing costs (we’ll thank the Big Apple for that), post-secondary educational opportunities and a low uninsured rate outweigh the cringe-worthy rent checks you’ll sign to live there.

Best cities for women to live in New York

There’s more to Vermont than killer maple syrup and backcountry powder skiing. Time and time again, Vermont is among the safest states in the US.13 If living in the Green Mountain State means you might not feel the need to clutch your pepper spray so tightly the next time you’re walking in a parking lot, that’s important.

Vermont also offers birth control coverage without a deductible or copay, which means women have better access to reproductive healthcare without having to jump through all the usual hoops.

Best cities for women to live in Vermont

The North Star State has a lot to be proud of. Fewer than 5% of Minnesota women are uninsured—better than both New York and Hawaii—and its wage gap is within the $0.80 range.

If you’re willing to brave the cold, Minnesota is a place that’s easy to warm up to.

Best cities for women to live in Minnesota

Instagram-worthy views and sunsets that put your computer desktop to shame are reason enough for anyone to move to Hawaii. The Aloha State is especially good for women: it has the highest women’s life expectancy at birth,14 and hey, we’ll take as many Hawaiian sunsets as we can get.

Hawaii doesn’t offer birth control coverage without a copay. But only 5% of women are uninsured in Hawaii, which means better coverage for a doctor’s visit—whether it’s for a jellyfish sting or sprained ankle.

Best cities for women to live in Hawaii

Did you know that Delaware has the second-highest median earnings for its female workers?15 Neither did we. Delaware’s wage gap of $0.86 is better than every state ahead of it on this list except Washington, DC, and New York.

(And let’s not forget that there’s no sales tax in Delaware.)

Best cities for women to live in Delaware

Kentucky is the only southern state on our list, and it has a few stats that set it apart from surrounding states.

In Kentucky’s neighboring states—specifically Mississippi and Alabama—16.8% and 12.8% of women are uninsured, respectively. Meanwhile, the Bluegrass State’s uninsured rate (6.0%) is less than half that of its neighbors.

Plus, Kentucky’s average monthly rent of $742 is lower than any other state in our top ten—which might make it more doable if you live alone.

Best cities for women to live in Kentucky

Sure, California has great beaches, A-list celebrities, and cities chock-full of bougie brunch spots to hit on a Sunday morning, but there’s more to the Golden State than its curbside appeal.

California has a lower percentage of uninsured women (8.5%) than other highly populated states. To put it in perspective, that’s less than half of Florida’s 17.1% uninsured rate.

Also, California ranks #1 for the narrowest wage gap. No US state currently tops $0.90 (don’t get us started), but California’s $0.89 comes admirably close.

Of course, housing costs in the Golden State are steep, but that’s the case no matter which direction your gender arrow points.

Best cities for women to live in California

The 10 worst states for women to live

Population (10%): This metric represents the population in each state’s major cities.

Rent (10%): To better understand cost of living, we analyzed the average rent for a one-bedroom apartment in major cities across the state.

Post-secondary schools (10%): We calculated the number of universities, colleges, and other educational institutions in each state’s major cities to determine the availability of post-secondary education.

Crime data (10%): To determine how safe each state is, we looked at 2017 data on the number of property and violent crimes in major cities as reported to the FBI.

Gender wage gap (20%): This statistic represents the average amount a full-time working woman makes for every dollar a man makes.

Uninsured women ages 18–64 (20%): To quantify access to healthcare, we looked at each state’s percentage of uninsured women—irrespective of how each woman obtains their insurance.

Birth control coverage without a copay or deductible (20%): We used this metric to determine availability of preventative care—specifically birth control—for women in each state.

Let’s get you on your way

Thinking of moving to one of these top states? Check out our list of the Best Interstate Moving Companies.

Did your state make one of these lists? Let us know in the comments section below!

Written by
Julia Campbell
Julia Campbell is a full-time writer who knows the tricks of the trade when it comes to planning a hassle-free move. Having moved seven times in the past five years, she draws from her own experience and industry expertise to help you avoid her biggest mistakes (like that time she thought she could get away with packing her dishes without wrapping them first).
Read More