Our top pick: If you’re looking for an alternative to satellite or cable, we recommend YouTube TV. It’s easy to use, has a ton of channels, and comes with unlimited DVR storage.

Data as of Jun 29, 2021. Offers and availability may vary and are subject to change.

What should you look for in a live TV streaming service?

Should I cut the cord?

Not sure whether to get rid of cable? We break down the pros and cons to help you decide between cable and streaming.

YouTube TV is the best overall live TV streaming service because it has most of the in-demand channels, gives you unlimited cloud DVR storage, and is easy to use. You pay a price for the awesomeness ($64.99 per month), and YouTube TV recently cut its regional FOX sports coverage—but it’s tough to find a better option.

YouTube TV has an incredible channel lineup. It gives you the major networks, throws in hotspots like AMC and USA, and even mixes in news and some of the best national sports coverage of any live streaming service. Check any list of the top TV shows, and chances are you’ll find most of the picks on YouTube TV.

YouTube TV enables you to stream on up to three devices at a time, so there’s no fighting over what to watch.

YouTube TV uses the basic YouTube format you’re already familiar with, so you can hit the ground running. The only difference is that you can browse your favorite live TV shows in addition to cat videos, music videos, and movie trailers. 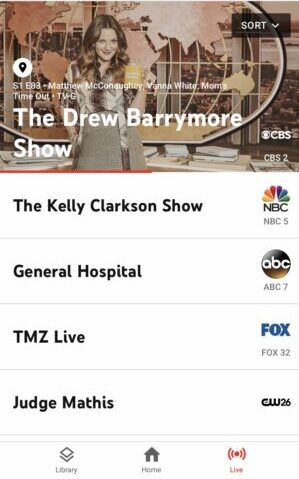 YouTube TV provides unlimited cloud DVR storage at no extra cost. That means you could glue yourself to the screen day and night and never run out of things to watch. The catch? YouTube TV deletes your shows after nine months.

Hulu + Live TV is our pick for the best value because it combines live TV with a growing on-demand streaming library. You can even get a Disney+ add-on to watch Disney classics and favorites from the Marvel universe. If that’s not enough, you can watch Hulu on almost 20 devices. But you'll have to pay extra to fast-forward through commercials and to store more than 50 hours on your DVR.

Hulu + Live TV has a huge on-demand streaming library. Not only can you find mainstream hits like This is Us and Survivor, but you also get access to exclusive original content like The Handmaid’s Tale and Normal People. Hulu has one of the most wide-ranging streaming libraries around, from proven classics to current hits to edgy originals.

You can watch it on most devices

Our Top 5 list focuses on live TV streaming services. Netflix doesn’t make the cut because it doesn’t have a live streaming option.

Looking for the best streaming service?

Philo is our pick for the cheapest live TV streaming service because, well, it’s cheap ($20 per month). Most of its competitors cost three times as much. You also get unlimited DVR and can stream on up to three devices at once. Unfortunately, you don’t get local channels or any sports.

Philo costs only $25 per month. To put that in context, Philo saves you more than $500 per year compared to most companies on our Top 5 list.

Philo has one of the holy grails of live TV streaming: unlimited cloud DVR storage. But you’ll need some vacation time if you plan a binging spree: Philo deletes TV shows from your DVR after 30 days.

Stream on three devices at once

With Philo, you don’t have to fight with your family and friends about what to watch. Subscriptions allow simultaneous streaming on up to three devices.

Best for sports
fuboTV
Our Rating

fuboTV is our pick for the best sports streaming service. More than 50 channels give you everything from the NBA and NFL to MLS and NASCAR. You even get access to international sports—and fuboTV has 250 hours of DVR storage. Just be aware that fuboTV is available on fewer devices than most of its competitors and that its add-ons (additional channels) are pricey (you’ll pay almost as much as old-school cable).

fuboTV is your go-to source for big-time sports like the NBA, NFL, and college football and basketball (including many regional sports networks). That includes major sports channels that often cost extra with other streaming services: 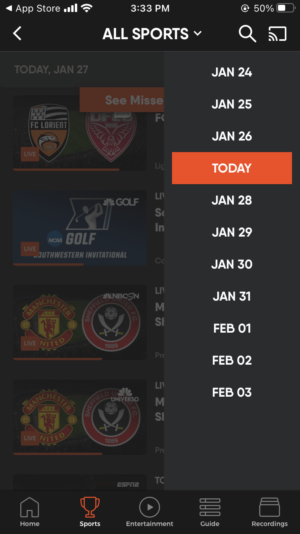 fuboTV also has a solid mix of traditional entertainment channels. You get your local networks, popular channels like USA and FX, and can even purchase add-ons for premium channels like Hallmark Movies Now, HBO Max, and Cinemax (although they’re a bit pricey).

SlingTV is an excellent choice for children because it comes with parental controls and tons of kid-friendly channels. It’s also relatively cheap compared to other popular streaming services (prices start at $35 per month). But . . . SlingTV has the fewest channels of anyone on our best list, and its cloud DVR storage caps out at a measly 10 hours.

Sling TV has a ton of channels perfect for kids. From educational programming for babies and toddlers to family-friendly entertainment for your teenagers, it’s easy to find TV shows tailored for your little ones. Basic service comes with channels like Disney, Nickelodeon, and the Cartoon Network. You can also purchase a Kids Extra add-on with more options:

You won’t break the bank

Most live streaming options cost upwards of $70 per month, but Sling TV starts at an affordable $30. It has 10 add-ons you can purchase if you want more channels—and the prices are pretty reasonable. Want Kids Extra? Five bucks. A sports add-on with more than a dozen channels? Make it 10. You can pick and choose the channels that fit your budget.

Need streaming options for the kids?

What is live streaming?

Live streaming is a type of internet streaming that happens in real time. As you record the event you’re watching, the event is simultaneously being broadcast. In this way, live streaming is a lot like traditional live TV shows like Saturday Night Live and The Late Show; it just happens over the internet.

However, internet live streaming differs from viewing live TV on cable and satellite TV services in one important way: you watch live-streamed shows using a streaming app on a device such as a Roku or a smart TV like an Apple TV instead of using a receiver or DVR box.

Live streams also differ from video on demand (VOD) media like YouTube videos and movies on Netflix, which can be rewatched, rewinded, and fast-forwarded at will since they aren’t broadcast and viewed during the recording process.

This makes live streaming the best way to watch all your favorite sports and live shows as they’re happening instead of watching them when they become available on VOD platforms later.

How much does live TV streaming cost?

Live TV streaming costs range from $30 to $80 per month (not including add-ons). Cable TV is more expensive, with monthly prices ranging from $45 to $135.

Is there a cheap TV option for live streaming?

Yes, Philo has a live TV streaming plan that costs only $25 per month. It comes with unlimited DVR and simultaneous streaming but doesn’t have local channels or sports.

YouTube TV and Philo include unlimited DVR storage in your monthly plan. YouTube TV is Move.org’s best overall live streaming service, and Philo is our pick for the cheapest option.

What’s the best room for your router?

The best room for your router is near the center of your home. Avoid internet dead zones like basements and closets.

Why is streaming a good cable alternative?

Streaming is a good cable alternative because you can save money and still get many of the channels you like. You also don’t have to deal with things people hate about cable TV, like long-term contracts, having access to channels you don’t want, poor customer service, and installation appointments.

Do streaming services have cable channels?

Yes, streaming services have cable channels. The best companies (like YouTube TV and Hulu + Live TV) have popular cable channel lineups like FX, Syfy, ESPN, and USA. Even if you don’t initially see what you want, most services allow you to purchase premium cable channels (add-ons) for an extra cost.

No, Netflix doesn’t have live streaming. Netflix specializes in on-demand content ranging from proven classics to Netflix Originals like Cobra Kai, The Crown, and The Queen’s Gambit.

What is the best streaming device?

The best TV streaming service is YouTube TV. Move.org gives YouTube TV 4.5 out of 5 stars because of its channel lineup, easy-to-use interface (everyone knows how to use YouTube), and unlimited DVR.

Now that you know all about the best TV streaming services on the market, check out these home services guides and reviews to make your new place feel like home:

Written by
Kurt Manwaring
Kurt Manwaring brings nearly a decade’s worth of research experience as a business consultant to the Move.org team. He specializes in taking complicated issues (like moving) and presenting them in a way that everyone can understand. His writing has been featured in hundreds of publications, including USA Today, Martha Stewart Living, Country Living, Good Housekeeping, Heavy, Slate, and Yahoo! Lifestyle. He brings a BS in sociology and an MPA (masters of public administration) to the Move team. He would love to hear about your moving experiences and questions at kurt@move.org.
Read More