Plenty of big cities still fall under the federal minimum wage of $7.25, which isn’t a living wage for the majority of people in the US. So where can you live on minimum wage and still have a comfortable, affordable life?

We ranked the 75 biggest cities in the US by how many hours it would take to afford a one-bedroom apartment while making minimum wage. This doesn’t include all the other cost of living factors, but it does show where even paying rent on a single minimum wage job won’t work (if you’re planning on renting alone). 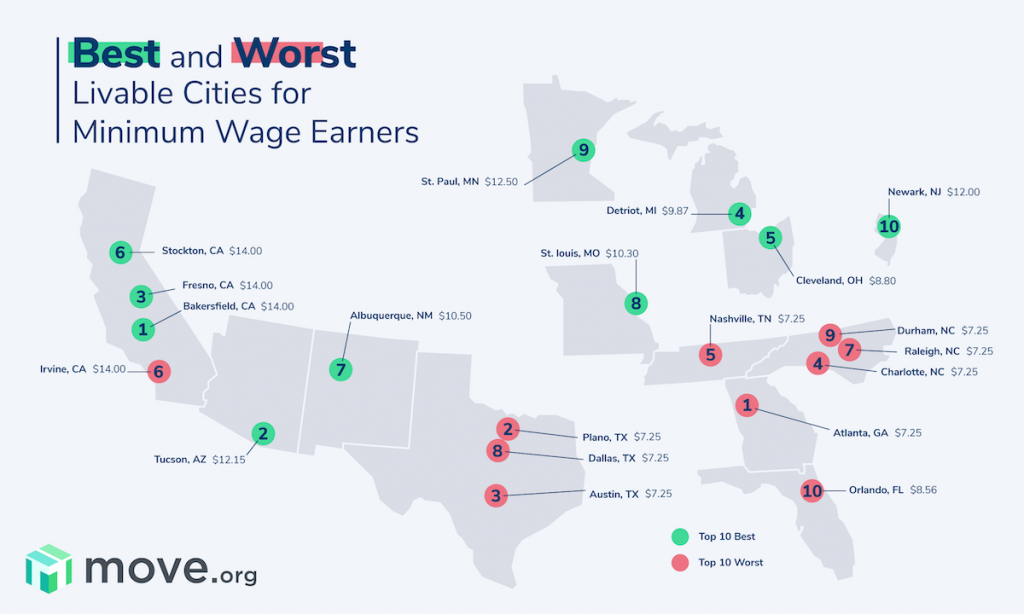 The average minimum wage in these 75 cities is $10.40 per hour, but the average one-bedroom apartment rent is $1,040 per month—that means rent in most big cities requires over 60% of monthly gross minimum wage income, which doesn’t include taxes.

You should be wary of places with a current federal minimum of $7.25 per hour and high rent—they’re likely unaffordable. Unless you have some housemates who can help cover the bills, or you’re going to work multiple jobs, you may want to consider moving to a nearby surrounding city or town with lower costs.

Best cities for a single-bedroom renter living on minimum wage

These days, living alone in a single-bedroom apartment in a bigger city may seem like a distant dream. However, two cities still (theoretically) allow minimum wage earners to only work one job and live there affordably: Bakersfield, California and Tucson, Arizona.

Increasing the federal minimum wage could help millions afford comfortable living, but for now it’s best for workers making minimum wage to try to find an affordable place outside the big city expenses.

We analyzed the 75 most populous cities in the United States. We ranked each city by how many hours it would take for a renter to afford the median one-bedroom apartment in those cities while making minimum wage.

If the state/city’s minimum wage is under the federal minimum, we used the $7.25 minimum wage.

Additional expenses like food, insurance, entertainment, and transportation had no impact on the rankings, though some are mentioned occasionally throughout the article. We also didn’t rank these cities based on crime statistics, unemployment rates, access to government services, or other secondary factors.

Though cost of living and income levels both factor into how livable a city might be, these rankings don’t necessarily reflect the overall quality of life for residents.