The Most Dangerous States for Wildfires 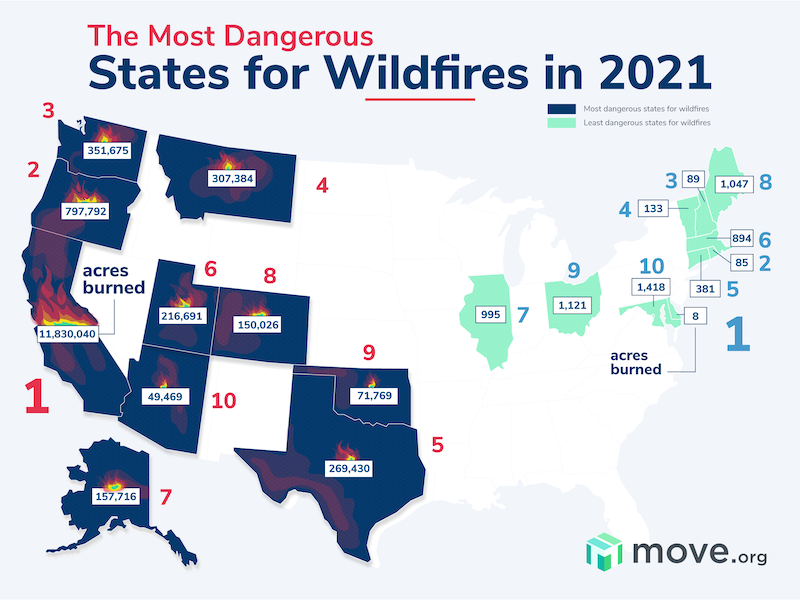 Wildfires are a growing problem in the United States and around the world, and all signs point to fires continuously becoming greater threats to life and property as climate change worsens.

With wildfires on the rise, you’re probably wondering which states are the most endangered by them. We dug into the data for the last three years and found that states in the western half of the country consistently see the worst fires, though many states across the nation saw fire rates increase from 2019 to 2020.

Keep reading to learn more about fire rates and see where your state ranks among areas where wildfires rage most often.

The safest and most dangerous states for wildfires

States where the most acres burned in 2020

States where the fewest acres burned in 2020

As you can see, there’s a pretty stark wildfire disparity between the western and eastern halves of the country. Most states with the largest 2020 wildfires lie in the West, while all of the states with the fewest wildfires are eastern states. In fact, most of them lie directly on the East Coast.

There are a few notable exceptions, though. For example, Florida ranks 12th most dangerous in our data despite being an East Coast state.

It’s also worth noting that many of the states with the fewest burned acres have less total acreage than states where more acres burned. For example, Delaware is only 1,265,920 acres in size,1 while Texas is 168,217,600.2

However, even accounting for outliers and differences in total acreage, western states are clearly at much greater risk for wildfires than eastern states on average.

For our research, we used data gathered and published by the National Fire and Aviation Management Web Applications Program.3 To get a full understanding of the growing rate of wildfires in the US, we looked at wildfire data from the last three years. We also looked at the most common causes of wildfires.

However, states were only ranked for their total number of acres burned in 2020. States were not ranked for other factors like statistical wildfire increases over time and wildfire causes.

10 states did not have 2020 wildfire data published, so they weren’t included in our rankings.

Wildfire danger in every state