Where can you live on retirement income or minimum wage? With the recent executive order to increase the minimum wage to $15 per hour (for federal contractors only), we wanted to find the most affordable cities and metro areas in the US.

Common budgeting advice usually says rent should be 30–35% of your income while spending another 10–15% of your monthly budget on groceries. With a $15 per hour minimum wage as a baseline, living on $31,200 per year means $2,600 per month in gross pay.

It’s even less for retirees relying on social security who receive a $1,514 average monthly benefit.1 About 21% of married couples and about 45% of unmarried people rely on Social Security for 90% or more of their income.

To find the best cities for budget-friendly living, we selected a diverse array of metros around the country. We ranked on the following criteria:

In the event of multiple metros in one state, we prioritized higher population areas because there’s likely more entertainment, activities, and potential friends nearby. When you’re saving on basic living expenses, you can do more of what you want to do (even if that’s just staying home).

Our report doesn’t account for taxes, debts, child support, or other extra expenses, so you’ll need to make sure your budget works with the estimates provided. For more info jump to our full methodology.

A little over half of America (27 states) has metros that met our criteria for affordable housing and food prices, and low crime rates. Across these metros, the average gross rent as a percentage of income is 28.2%,5 which fits under the 30–35% rent-budgeting model. 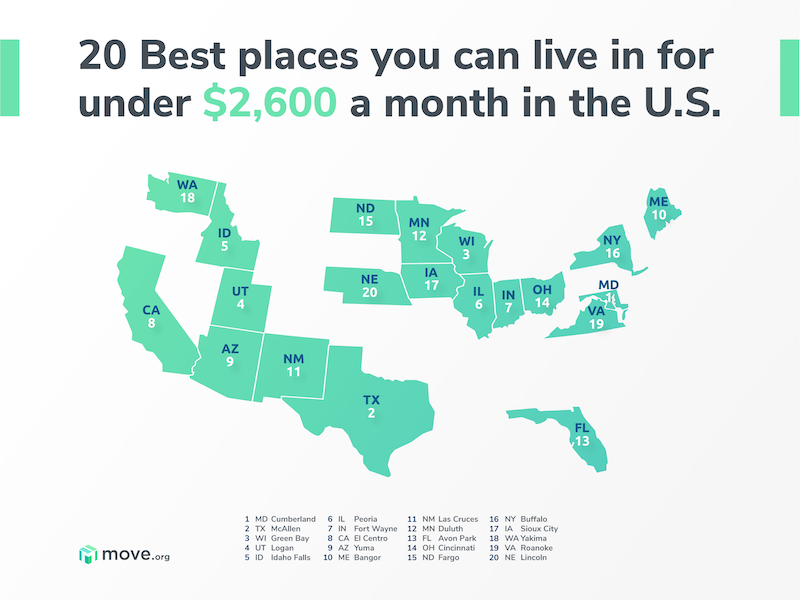 The median rent in the best affordable cities is $814, whereas the US median gross rent is $1,097, according to the U.S Census Bureau. You could save about $283 per month in rent alone by moving to one of these metros.

Cumberland, Maryland, had the lowest rent at $628 per month and scored the highest overall as the best city for affordable living in our ranking.

California and New York may seem like expensive states, but you can avoid big-city prices if you don’t need to be in the big city. El Centro, California, is about two hours from San Diego, California, and Tijuana, Mexico. But if you have Big Apple dreams, the Buffalo-Cheektowaga metro is a lot closer to Toronto than New York City.

Are you looking for low-cost living in Texas? You can pay only $763 in rent and $201 in groceries per month in McAllen-Edinburg-Mission. However, this metro area is about a three- to five-hour drive from major cities like San Antonio, Houston, and Austin (but only over an hour from the Gulf of Mexico).

For all you Cheeseheads out there: Green Bay, Wisconsin, is the perfect place to pack up your pennies with a low rent of $788 and average grocery price of $248 per month.

Feeling high-rent stress in Salt Lake City, Utah, and don’t need to be close to downtown? You should check out Logan, Utah. The median rent in Logan is $763 per month, and groceries are about $247 per month. You’ll live close to beautiful mountains and less than an hour from Bear Lake.

For those looking to move across the country, you can find affordable places to live in almost every US region, but you may have to make some compromises on living in your dream city (for now!).

*These metros are spread across multiple states.

We ranked each metro area on the weighted factors below:

We omitted cities with a median monthly rent over $886 and any metro areas with missing crime data. FBI crime data included 290 cities.

In states with multiple metros that qualified, we prioritized the metro with the highest population.