Which States Have the Most Mortgage-Free Homeowners? 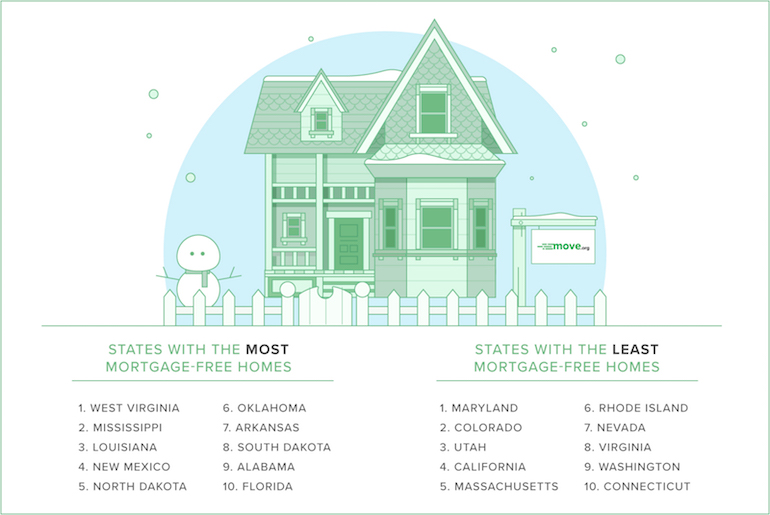 Homeownership is one of the marquee features of the American Dream. But how many Americans actually own their homes?

Most house hunters don’t arrive at the closing table with a briefcase full of Benjamins. Nor are they as lucky as that kid from the forgotten ’90s classic Blank Check. (P.S. There’s no way he could buy that house for only $300,000. Not even in ’94.)

Most of us need a mortgage—otherwise known as a home loan.

Over 62% of US homes carry a mortgage,1 but some states have a much higher percentage of mortgage-free homes than others. So which states reign supreme as the most mortgage free of all?

Read on to learn who we ranked as the most mortgage-free states in America.

Using the US Census Bureau’s 2017 American Community Survey, we looked at three factors to determine our rankings:

After collecting each state’s percentage of owner-occupied housing units with and without a mortgage, we ranked them from highest to lowest percentage of mortgage-free homes.

To learn more about how we calculated our rankings, check out our methodology section.

West Virginia’s homeowners lead the pack with an astonishingly high mortgage-free rate of 54%. In fact, the Mountain State boasts 3% more mortgage-free homes than our runner-up, Mississippi.

Another fun fact: Mississippi has the second-most mortgage-free homes in the nation—and nothing smells better than a paid-for home.

Louisiana is the first state in our top ten to drop below the 50% threshold for households with no mortgage debt, but a 47% mortgage-free rate is still impressive.

Although the majority of states in our top ten are located in the southeastern and midwestern US, the Land of Enchantment represents the West in our fourth spot.

Roughly 46% of owner-occupied homes in New Mexico are paid off.

The Roughrider State has the fewest owner-occupied housing units in our top ten, and nearly 90% of its land is made up of farmland and ranches.4

Not only do its residents enjoy peace and quiet, but they also enjoy peace of mind: Over 45% of North Dakota’s homes are mortgage free.

It turns out Sooners tend to pay off their mortgages sooner rather than later.

More than 45% of Oklahoma’s homes are owned free and clear. That means over 400,000 households get to skip their mortgage bills every month.

There couldn’t be a better nickname than the Land of Opportunity for a state with such a high number of paid-for homes.

Arkansas ranks at number seven on our list with a mortgage-free rate of nearly 45%.

South Dakota lands behind Arkansas in our rankings—but just barely. With a mortgage-free rate of 44.64%, Bob Barker’s home state is only 0.05% shy of nabbing the seventh spot.

Judging by the number of paid-off homes, we’d certainly say the price is right in South Dakota.

Although it comes first when you sing the lyrics to “Fifty Nifty United States,” Alabama is ninth on our list.

Over 43% of Alabama’s owner-occupied homes are owned outright—which means more than 547,000 homes in the Heart of Dixie are mortgage-free.

Florida has by far the most owner-occupied housing units in our top ten. It also has the most without a mortgage: a staggering 2.2 million. That’s nearly as many paid-for homes as the total number of homes in our top three states combined.

Since our rankings are based on the percentage of mortgage-free homes in each state, however, Florida rounds out our top ten.

States with the fewest mortgage-free homes

New England is a notoriously expensive place to live, so it’s no surprise that it’s home to several states in our bottom ten.

Only about 32% of Connecticut’s owner-occupied homes are paid for. That’s 11% fewer than our number ten state, Florida.

On the opposite side of the country, you’ll find our next state: Washington. With a paltry 31.18%, the Evergreen State ranks forty-second overall for mortgage-free homes.

Virginia comes next on our list, but it isn’t too far behind Washington. At 31.10%, Virginia’s mortgage-free rate means that just 646,000 of its 2 million owner-occupied housing units are free and clear.

You might think that living inland would be easier on the pocketbook, but that’s not always the case.

As one of only three landlocked states in our bottom ten, Nevada has more than 427,000 mortgage-laden homes. That’s 69% of its owner-occupied units.

Rhode Island may be the smallest state in the Union, but it has one of the highest percentages of homes with mortgages.

Like Nevada, over 69% of the Ocean State’s homes need to budget for mortgage payments each month.

Living on the coast certainly has its perks, but paying off your home doesn’t seem to be one of them.

Massachusetts is one of five East Coast states in our bottom ten, and nearly 70% of its owner-occupied homes still have a mortgage.

California has over 7.1 million owner-occupied housing units. With a median home value well above the national average,5 it’s easy to see why more than 70% of those homes have a mortgage.

Home values in the Beehive State have risen almost 14% in the last year,6 almost doubling the national average increase of 7.7%.7 And with more people moving in from out of state, fewer residents can boast that they’re mortgage free.

Right next door to the forty-eighth state on our list is Colorado, which comes in at number forty-nine.

And much like their geographical proximity, both states’ mortgage-free rates are very close. Only 28.71% of Colorado’s homes are paid for—just 0.23% less than Utah.

At number 50, Maryland has the lowest percentage of paid-for homes in the entire US.

Only 27% of Maryland’s owner-occupied units are free and clear, leaving well over a million of the state’s homes saddled with a mortgage.

Is your home paid off?

Are you one of the lucky homeowners in your state without a mortgage payment? Share the secret to your success in the comments below!

Move.org used the US Census Bureau’s 2017 American Community Survey to collect homeownership statistics for US residents. We focused on the total owner-occupied housing units and looked at the percentage of homes with and without a mortgage. We then ranked the states from highest to lowest percentage of owner-occupied housing units without a mortgage.

Written by
Colin Holmes
Colin Holmes is no stranger to moving: he’s done so five times in the last five years, and he’s used his expertise to help over 185,000 readers plan their moves in the last year alone. As a former journalist and documentary interviewer, Colin brings a wealth of research experience to Move.org.
Read More