Here Are the Best (and Worst) Cities for Endless Sunshine 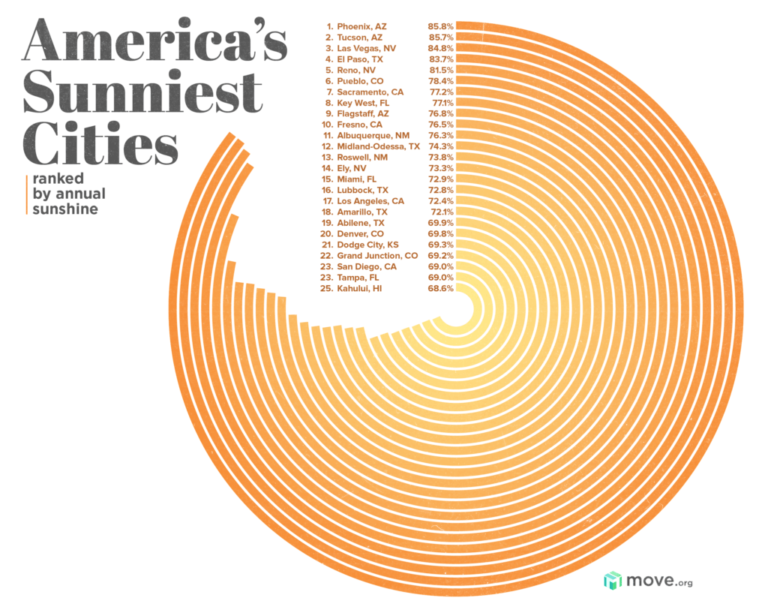 Do you need to get your fix of vitamin D? Has it been too long since you’ve seen the sun? Have you ever come home from a cold day, thrown on a bikini, and sat on a beach chair in front of an array of SAD lamps trying to recreate the warmth and joy you once knew in the summer months?

While we’ve totally never done that here at Move.org, we understand why you’d want to. Whether it’s winter where you live or you just can’t get enough sun, you might want to think about moving to a sunnier city.

Where can you go, even temporarily, to keep up on your tanning routine? We compiled a list of sunniest cities in the US.

Are you lucky enough to live in one of these sunny spots? If not, where do you live, and do you get enough sun? Let us know in the comments.

The sunniest state of all: Arizona

There’s a reason why so many people migrate to Arizona and don’t fly back for the winter. Phoenix, Tucson, and Flagstaff are all in the top 25 sunniest cities in the US, and Phoenix ranks #1 with an annual sunshine rate of 85.8%.

While you’re visiting Arizona, you can check out the Grand Canyon and Monument Valley for some awesome desert vibes, or you can take a dip and hike around Havasu Falls. And you’ll be picking up some major vitamin D along the way—don’t forget your sunscreen!

The West Coast is the best coast for sun

On average, the West Coast region of the US is sunnier than both the Midwest and the East Coast. A total of 21 of the top 25 sunniest cities are on the Pacific side of things, and that rises to 22 if you count Kahului, Hawaii, which is like the West Coast’s cool cousin that lives just outside of the neighborhood.

That leaves only three cities outside of the West Coast in the top 25. Two Florida cities picked up top spots: Miami ranked #15 and Tampa ranked #23. The Sunshine State showed up, even if it didn’t quite get as many cities on the list as Arizona.

Some people try to get out of Dodge for a little bit, but if you want some good ol’ sunshine, you might as well get back to Dodge (City, Kansas, that is) which ranked #21 on our list.

Which are the worst cities for endless sunshine?

Can’t stand the cold, cloudy confusion that days of endless gray bring? You’ll want to avoid staying in these places, which are the least sunny cities in the US.

Least sunny cities in the US

We’re not surprised to see some notoriously rain-ridden cities included on the least sunny list. Places like Seattle, Washington, and Anchorage, Alaska are absolutely gorgeous, but even for those that love the rain, the overcast days can leave you in a daze if you go too long without seeing the sun.

A city that may surprise you is the Hawaiian town of Hilo.

The area receives massive amounts of rainfall, which mostly falls between midnight and sunrise. The clouds evaporate during the day, but that doesn’t happen immediately, and you’ll still get stretches of long rainfalls that put it on the less sunny side of the spectrum as a whole.2

You can definitely catch the sun out there, but if your timing falls within a rainy spell, just hit the west side of the island, Kona, for some rays.

Look at the bright side

If you do find yourself in a gloomy part of the nation, or if you’d just like to sneak in a quick tan, you can always take a trip to one of the sunniest cities in America.

Or, perhaps it’s finally time you pack up and move to a state where the sun shines more often than not. We’re looking at you, Arizona.

Looking for a job in a new city?

If you’re planning to move to a new city but want to switch careers or find a new job before you do, you need to prepare in advance. Here are a few helpful tips to help you find work before or soon after you move to your new location.

To find the sunniest cities, we sourced the National Oceanic and Atmospheric Administration’s 2015 Comparative Climatic Data report. Each city was ranked based on the annual average percent of possible sunshine.

NOAA defines the sunniest cities by the total time that sunshine reaches the observing station, which is expressed as the percentage of the maximum amount possible from sunrise to sunset in clear sky conditions.