The Least Livable US Cities for Minimum Wage Earners in 2020 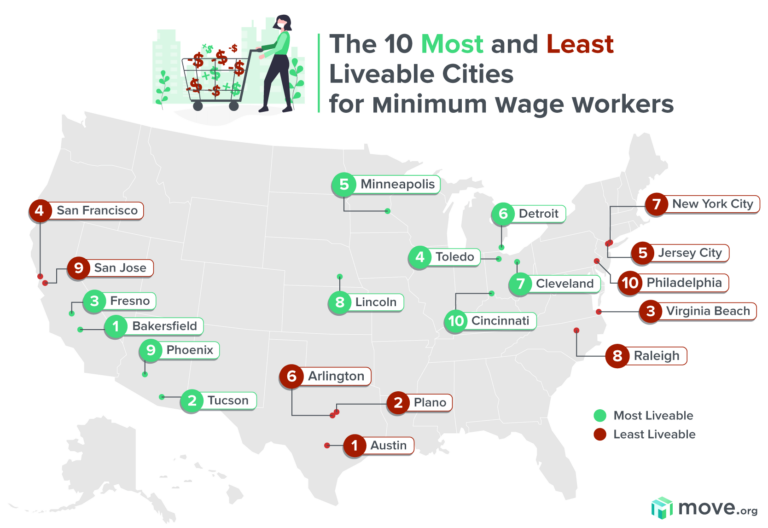 From New York to Los Angeles, American cities are known around the world for being vibrant, industrious, and constantly growing. Every year, more people are enticed into big cities by unique job opportunities, cultures, landscapes, and communities.

As populations in these cities rise, so too does the cost of living—and if a city’s minimum wage doesn’t increase fast enough to match its growth, residents can be hard-pressed to make ends meet.

This is because minimum wage and living wage (how much you actually need to earn to get by) aren’t the same thing. The federal minimum wage in the US is $7.25 an hour, but the living wage in many US cities is much higher.

States and some cities set their own minimum wages to help their citizens break even. While this makes it easier for breadwinners to put food on the table, not all states or cities take this step. Even cities and states that increase the minimum wage almost never set the threshold at the living wage.

If you work a job that pays minimum wage and you want to move to a different city, check that city’s living wage to make sure it would be feasible for you. To help you out, we’ve compiled a list of popular American cities and ranked them based on how easily someone on minimum wage could afford to pay rent there.

Keep reading to learn what we discovered.

We looked at the 75 most populous cities according to the U.S. Census Bureau1 and gathered the following info about each:

We then calculated how many hours minimum-wage earners living in these cities would need to work to pay for a small apartment.

Based on our calculations, we ranked the cities from the least livable to the most livable for minimum-wage earners.

Austin is often ranked among the best US cities to live in, and it’s easy to see why: it has a healthy economy, a bumping nightlife, and a world-famous food scene. But this all comes at a cost, and since Austin hasn’t set its minimum wage higher than the federal limit, it’s the hardest city in the US for minimum-wage earners to live in.

Plano is known for its strong economy and thriving job market, thanks in part to city officials who work hard to attract corporations to set up shop there. However, like Austin, the city’s minimum wage is set at the federal limit, and the cost of living requires minimum-wage earners to clock a lot of hours.

Virginia Beach is a vibrant seaside city that looks directly out onto the Atlantic Ocean, making it an ideal spot for anyone who loves long walks on the beach, fresh seafood, and oceanfront nightlife. The downside is that Virginia Beach’s minimum wage is just $7.25, so you’d need to work about 35 hours every week just to pay rent on minimum wage.

San Francisco is a popular tourist destination, a diverse melting pot of culture, and a hub for technological advancement. Additionally, it’s the first city on our list with a minimum wage ($16.07) above the federal limit.

However, the city’s ever-increasing cost of living makes it notoriously unlivable for all but the highest earners. For this reason, it might be more feasible to visit SF than to move there.

Just across the bay from New York City lies Jersey City, a historic den of artistic talent and ethnic diversity. The skyline is crowned with skyscrapers, and many celebrities (Shaquille O’Neal, Martha Stewart, and Frank Sinatra, to name a few) have called the city home.

Like the other Longhorn State cities we’ve mentioned so far, Arlington’s minimum wage is set right at the federal limit. The good news is that the city lies right between Fort Worth and Dallas, two of Texas’s biggest cities, so residents have plenty of job prospects.

New York City is the most populous metropolis in the US, and it’s arguably the most famous as well. Immortalized in countless songs, movies, and TV shows, the Big Apple is a popular tourist destination, and many dream of living there at some point.

Raleigh, the capital of North Carolina, is the very best city in the US for jobs according to Glassdoor. This is a little surprising considering that the city’s minimum wage is $7.25. Despite this, Glassdoor lists the city’s median base salary as $55,252.3

San Jose is sometimes referred to as “The Capital of Silicon Valley” because industry giants like eBay and Samsung have their headquarters there. As a complement to all this innovation, the city also has a rich past and a historic downtown area.

Unfortunately, the cost of living is so high that a minimum-wage earner would need to work a lot of hours just to put a roof over their head.

Philadelphia’s history is almost synonymous with the history of the USA itself, and it is home to monuments like the Liberty Bell and Independence Hall. The city has also played home to iconic characters like Rocky Balboa, Frank Reynolds, and the Fresh Prince of Bel-Air.

Bakersfield’s minimum wage is exceptionally high compared to its average rent prices, and you’d need to work just 13 hours a week to afford a single-bedroom apartment there. This makes Bakersfield the most livable city on our list for minimum-wage earners.

Two things make Tucson a superb college town: the University of Arizona and the city’s $12 minimum wage. This combination is ideal for students because it allows them to get an excellent education while earning enough money to stay afloat and avoid taking on immense amounts of debt. (Pssst: If you’re looking for an inexpensive place to study, check out our list of affordable college towns.)

A metropolis in the heart of farmland, Fresno offers a unique environment that blends rural and urban scenery into one. While rent in the city runs relatively high, the minimum wage is set at $13, so living in Fresno is still a realistic choice for minimum-wage earners.

Bonus fact for outdoorsy folks: Fresno is only 2.5 hours away from Yosemite National Park.

Toledo’s history is rooted in glass manufacturing, so it’s aptly called “The Glass City.” Jeep is headquartered in Toledo, and the company is one of Toledo’s largest employers. The average rent for a one-bedroom apartment in Toledo is the lowest of all the cities on our list.

Minneapolis’s minimum wage is the very highest in our top 10 cities for minimum-wage earners. While it’s average one-bedroom rental prices are also pretty high, you’d still only need to work about 16 hours every week to pay for an apartment while earning minimum wage there.

Also known as “Motor City,” Detroit is a historic town with a vital music scene and strong ties to the automobile industry. Detroit offers a higher minimum wage than the federal mandate, and rent for a one-bedroom apartment is very manageable.

Home of the Cleveland Cavaliers and the Rock & Roll Hall of Fame, Cleveland is a passion-filled city with lots to offer sports fans and music fans alike. To pay rent on minimum wage in Cleveland, you’d only need to work about 17 hours a week.

As the capital of Nebraska, Lincoln embodies the Cornhusker State’s community, history, and culture. Lincoln’s minimum wage is $9 an hour, and its rental prices are fairly low, making living there very reasonable. Lincoln is also home to three different colleges, so it’s a fantastic town for students—and a great place to stay after graduation.

If you want to live in a big city and don’t mind the desert heat, Phoenix might be the perfect place for you. The city offers a $12 minimum wage and a reasonable cost of living, so it’s easy to see why it’s one of the fastest-growing cities in the nation.

Cincinnati’s apartment rates are among the lowest on our list. Pair this with the city’s higher-than-federal minimum wage, and you’ve got a recipe for one of the most livable US cities of its size.

Cincinnati also has deep roots in beer culture and boasts a broad assortment of craft breweries, making it a great home for beer connoisseurs.

For our rankings, we analyzed the 75 most populous cities in the United States. These rankings were based solely on each city’s minimum wage and how much it would cost on average to pay for a one-bedroom apartment in that city.

Additional expenses like food, utilities, insurance, entertainment, and transportation had no impact on the rankings. We also didn’t rank these cities based on crime statistics, unemployment rates, access to government services, or other quality of life factors.

These five cities were omitted from our rankings because of missing rent data:

For the complete list of our rankings, check out the table below.

If our list made you consider moving to a city with a higher minimum wage or a lower cost of living than the one you’re in right now, we can help you find a long-distance moving company to get you there. Or if we helped you decide not to move somewhere with higher rent or a lower minimum wage, we would love to hear about it in the comments.

Have you ever lived on minimum wage in any of the cities we mentioned? Feel free to comment and tell us about your experience.