What Do Americans Think about Van Life during COVID?

Living in a van down by the river isn’t as bad as it may sound. If you’ve always wanted a minimalistic, off-the-grid life that’s full of adventure and travel, van life might actually be perfect for you.

Of course, we can’t all be #vanlife influencers on Instagram, and living la vida van comes with its share of downsides, including breakdowns, unexpected costs, and even some lifestyle and safety concerns.

2020 has thrown everyone a few curveballs financially, though, and we’ve found that the COVID-19 pandemic has pushed more people than ever towards the frugal freedom that comes with living in a van instead of a more traditional home.

Keep reading to learn more about van life in 2020.

Results from our van life survey 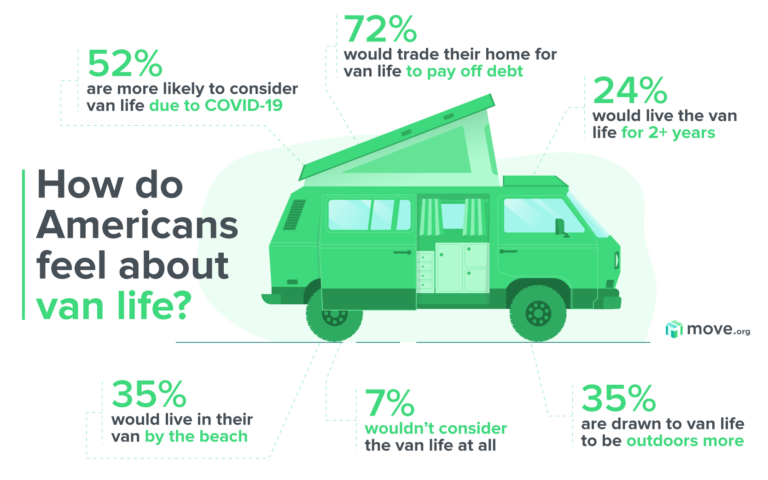 We surveyed hundreds of Americans about whether or not they would consider living in a van full-time. We also asked how the ongoing pandemic and related economic upheaval influenced their decisions.

Here is what our respondents had to say:

One interesting correlation from our data is that most of those who would consider van life because of COVID-19 were millennials. To break it down further, 31% of those considering van life because of the pandemic were in the 35–44 age range and 29% were in the 25–34 age range. One thing is clear: van life definitely isn’t as fringe as it used to be, especially among younger adults.

In fact, according to WhereYouMakeIt.com, searching #vanlife on Instagram turns up over 7 million posts, which is a 312% increase from 2017.1

Is van life cheaper than owning a home?

There are a lot of costs that go into living in a van. The price of the van, the cost to keep gas in the tank, and routine upkeep costs are the most obvious expenses, but there’s also the cost of converting your van into a livable space.

Van conversions range from spartan to luxurious, so the exact price depends on you. About a third of van conversions end up costing less than $5,000,1 but the sky is pretty much the limit.

Of course, for every cost that goes into van life, there’s a similar (and often higher) cost for living in a house. Between utility bills, HOA dues, property taxes, and other expenses, there’s a hefty price tag not included in your mortgage.

Because most of the costs are impossible to accurately predict, we’re going to just compare the cost of a few popular vans to the cost of homes in metropolitan areas. 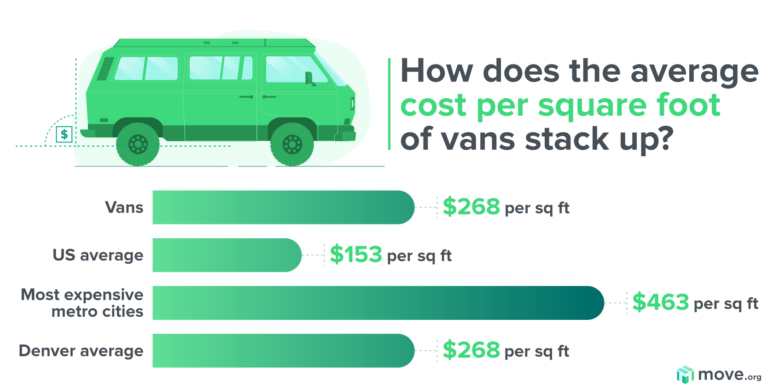 The average price of the five most popular live-in vans listed by Curbed is $33,863,2 and the average square footage for these vans is 126 feet—according to specifications we gathered from Motortrends.com.3 This means that on average you should expect to pay about $268 per square foot when you buy a new van that’s large enough to live in.

You could, of course, get a much cheaper van if you went with an older model or got something secondhand. The absolute cheapest option would probably be to find a secondhand van that has already been converted into a livable space. Just make sure the old owner is selling it because they’re giving up on van life, not because something is wrong with the van.

Surprisingly, the median price per square foot for homes across the US is a mere $153. This makes a mortgage seem a lot more affordable than the loan you’d have to take out to buy a van for $268 per square foot.

However, this median includes home prices for small and rural metro areas where home prices are as low as $73 per square foot. Homes in populous metropolitan areas cost much more. In San Jose, the country’s most expensive metro according to Zillow, the median price per square foot is $652.4

While homes in some areas can be cheaper per square foot than livable vans, there are two main factors to consider when assessing affordability:

The key takeaway is that if you’re okay living in a space that is smaller than a studio apartment, living in a van is much cheaper than buying a home, no doubt about it. And the perks of constant travel, closeness to nature, and minimalistic living are nice cherries on top of this affordable sundae.

For our survey, we reached out to hundreds of Americans and asked them how they felt about van life, what would convince them to try it, and how the COVID-19 pandemic influenced their choice.

For our price comparison between houses and vans, we researched the costs of the most popular live-in vans according to Curbed.2 We checked the specifications for these vans on Motortrend.com.3 Our pricing information for US homes came from Zillow.4