U-Haul is one of the most well-known moving companies in the industry, but does it really earn its renown? In early 2020, Move.org put U-Haul’s customer service and pricing to the test. We helped a family pay for a DIY move from Utah to New Mexico so we could get an inside look at a real-life U-Haul customer’s experience from beginning to end.

We’re happy to report that U-Haul did not disappoint. The company’s prices were fair, there were no surprise fees, and there were only two small customer service hiccups along the way. Keep reading to get the full details about this long-distance move with U-Haul.

Want to see what a U-Haul moving truck will cost for your move?

Unfortunately, scheduling hangups with home inspections and closing dates meant their move was a little convoluted. They gave notice they were moving out of their old home before the new one was available, so they couldn’t move into the new home for about two weeks after moving out.

To solve this problem, the Gawrychs rented a U-Haul truck, packed it up, drove it to New Mexico, unloaded it into a U-Haul storage unit, and rented another U-Haul truck a few weeks later to take everything to their new home.

Why the Gawrychs chose U-Haul

The Gawrychs considered several different companies and requested multiple quotes before they signed a rental contract.

They ultimately went with U-Haul for three very important reasons:

While Penske and Budget (two companies the Gawrychs considered) have several truck sizes each, U-Haul has more than both of them. This means that U-Haul customers can get a truck with just enough space without paying for any extra room. This put U-Haul at the front of the pack, and its competitive rates sealed the deal.

The Gawrychs also seriously considered PODS because a moving container might have made their move more convenient. If you need storage between your move-out and move-in dates, it’s easier to move with a moving container. However, you need a place to put your container outside your home while you pack it, which the Gawrychs didn’t have.

All of these factors made U-Haul the best option for the Gawrychs’ situation. 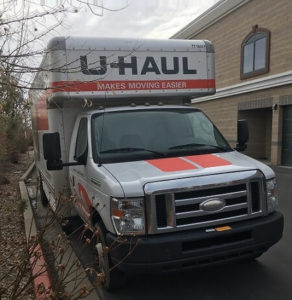 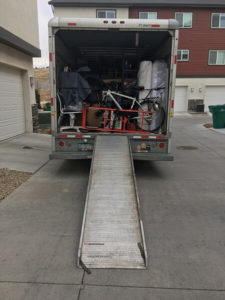 U-Haul versus its competition

The Gawrychs did what every mover should do before they pick a moving company: they compared it to its competitors. While U-Haul worked best for them, it might not be the best truck rental company for your situation. That’s why we recommend you read these guides before you make a decision:

We’ve found that U-Haul is generally the best truck rental company around, but one of the others might work better for your budget or your move.

Our U-Haul move at a glance

As you can see from the table above, U-Haul’s initial quotes for both the long-distance move and the local move differed slightly from the final prices.

However, these additional charges were expected. They came from mileage and fuel fees, which U-Haul was forthright about from the get-go. These were not hidden fees. In fact, U-Haul gave the Gawrychs a break on fuel fees, which we’ll get into later.

Like we said earlier, the Gawrychs requested quotes from several different companies for their long-distance move. U-Haul’s rates were the lowest by far.

U-Haul’s prices compared to its competitors

Keep in mind that truck rental rates can vary depending on location, distance, seasonality, and demand. For example, if the Gawrychs had moved in a different month or to a different state, one of the other companies might have had lower rates than U-Haul. That’s why you should always request quotes from several moving companies before you make your decision.

At almost every turn, the Gawrychs found U-Haul’s customer service to be polite, speedy, and helpful. Booking their trucks and storage unit took only a few minutes and a couple of phone calls.

There were two small hang-ups around picking up their first truck, but U-Haul made up for these shortcomings later on.

Picking up the trucks

Picking up the first truck in Utah took a little longer than expected for two reasons.

First, U-Haul changed the pickup location the day before the scheduled pickup. This can happen from time to time as inventories at different locations fluctuate. It wasn’t a major hassle, but it did mean the Gawrychs had to drive a little farther than they intended.

The second thing that delayed the pickup was a problem with U-Haul’s website. U-Haul sends you a link with pictures of the truck you’re going to rent so you can compare them to how the truck actually looks. This guarantees that you don’t get charged for old damage that wasn’t your fault.

They were able to bring a U-Haul employee out to check these damages, so it wasn’t a major problem—just a time-consuming inconvenience.

The Gawrychs ran into none of these problems picking up their second truck in New Mexico.

Dropping off the trucks

The drop-off process for both trucks was “easy peasy,” according to Chloe. There were no major problems or delays.

In fact, U-Haul helped the Gawrychs out after their 10+ hour drive to New Mexico. It was evening when they arrived in Rio Rancho, and they needed somewhere to stash the truck until they could unload it into their storage unit the next morning. Remember, they didn’t have access to their new home or its driveway yet, so they had nowhere to leave the truck overnight.

They asked to leave it on U-Haul’s lot until the next morning, which U-Haul allowed free of charge. The U-Haul representative did specify that U-Haul wasn’t liable for anything that happened to the Gawrychs’ household goods while the truck was in the lot. 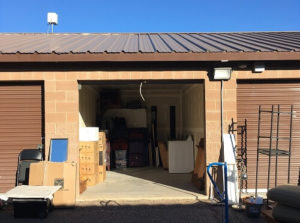 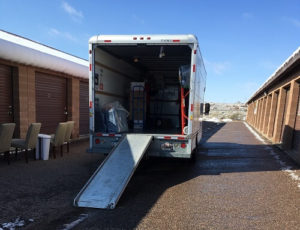 Just because you’re doing a DIY move doesn’t mean you need to do everything yourself. You can still hire hourly movers to help you load and unload all of your stuff, and U-Haul can help you find them. Through U-Haul, the Gawrychs were able to find and pay third-party movers that worked for their budget.

What surprised us about U-Haul

There were three things that surprised us about U-Haul. Two of them were good surprises, while the third was disappointing.

First, the U-Haul contract the Gawrychs signed stated they would be charged $40 plus $4 per gallon if they returned their truck without refilling the gas tank to where it was when they picked it up. For various reasons, the Gawrychs weren’t able to get gas before returning their first truck, but U-Haul charged them just $6.80 total for fuel. Not too bad.

Second, U-Haul’s free storage deal typically allows you to get a unit that’s the same size as (or smaller than) the truck you rented. When the Gawrychs called to book their unit, none of the largest units they qualified for were available. Surprisingly, U-Haul just gave them a bigger unit.

Both of these surprises go against U-Haul’s written policies, so you shouldn’t expect them. However, they do illustrate that U-Haul wants to help its customers more than it wants to throw the book at them.

When you pick up your U-Haul truck, you’ll probably need to fill it up right away. When trucks are on U-Haul’s lot, the company doesn’t keep their gas tanks full. The good news is that when you return your truck, you need to fill its tank only to the same level it was when you picked it up.

We’ve actually already talked about the disappointing surprise. On the day before the Gawrychs’ first pickup, U-Haul sent them an email telling them they needed to get their truck at a different location than they had originally booked. While this wasn’t a major problem for the Gawrychs, it could be a problem for you on moving day.

And if we’re being honest, this pickup snafu actually wasn’t that surprising. We write about U-Haul often, and pickup woes like this one are pretty common among U-Haul customers.

You can work around it by building plenty of time into your moving day schedule to allow for unfortunate possibilities like this.

Overall, the Gawrychs gave U-Haul 4.75/5 stars. U-Haul was helpful every step of the way, its prices were far lower than its competitors, and the company’s representatives let a few policies slide to help the Gawrychs out.

The only things to watch out for when you work with U-Haul are website troubles and last-minute pickup location changes.

If these small problems aren’t a major concern for you, we absolutely recommend renting a U-Haul moving truck for your next DIY move.

If you want to do a little more research before renting a U-Haul truck, go read our U-Haul Truck Rental Review or our Best Moving Truck Rental Companies list.