Lonely America: Where Are Folks Most Likely to Be Single, Divorced, or Dating?

Find the loneliest states in the US

We used Census data to map out which states (including Washington DC) had the most folks living alone, highest divorce rates, and most dating app-related searches. After normalizing the data, we ranked each state using weights for each category:

Where does your state land on the most lonely list? 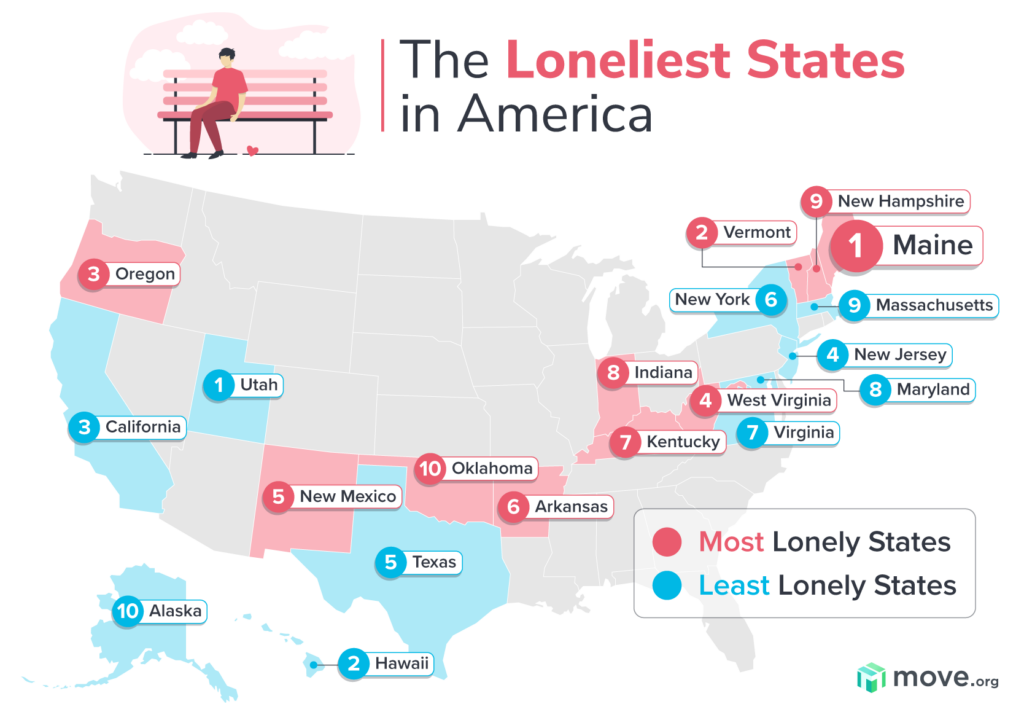 The most lonely places in America

Maine has the highest divorce rate (14%), matched with the highest search volume for dating apps like Tinder, Bumble, and more. On top of that, almost a third (31.2%) of Maine’s residents live alone.

Still, Washington DC is home to the most single folks: 44.8% of the district’s population lives alone. But DC seems somewhat content in its isolation; it had nearly the lowest interest in online dating (Hawaii had the least interest).

Plus, they say discussing politics during a date is divisive, which may make the nation’s capital dangerous territory for singles. According to SinglesinAmerica.com, 58% of singles believe it’s important to know a partner's political views.4

Top 10 loneliest states in  the US

Compared to Maine, more of Vermont’s population is living alone (31.6%), but fewer are divorced (12.5%). And the sweetness the Green Mountain State is looking for isn’t found in maple syrup either: Vermont had the second-highest search volume for dating apps.

While there’s plenty of lonely people in these cities, are there plenty of fish in the sea?

Each of the loneliest cities featured had close to 30% of their population living alone and above 12% divorce rates. But maybe the trick to avoid loneliness is to be surrounded by people?

Some of the most populated states like California, Texas, and New York rank among the least lonely states. These states also had the lowest search volume for dating apps and divorce rates, so you might be able to fight off the floundering feelings of loneliness by stepping out into the big city (with proper social distancing and other COVID-19 precautions, of course).

However, more people doesn’t necessarily mean less loneliness: Florida, the third-most populated state, was the 11th loneliest city with a higher-than-average divorce rate of (13.2%) and 28.7% of the population living alone. (Is there something in the water down there?)

And you may be surprised to see Alaska on the least lonely list below. After all, the Last Frontier is one of the least populated states and perhaps the most desolate. But Alaska’s single household population and divorce rates fall below the national averages, and the state showed the third-least interest in online dating.

Where else do people seem a little less lonely?

The least lonely states in the US

Utah, known for its big family sizes and industrial attitude, keeps a positive buzz alive as the least lonely state in the US. Less than 20% of Utah’s population lives alone (compared to the near 30% nationally), and the state has the third-lowest divorced population in the country.

Aloha to ohana: Hawaii makes a vibrant appearance as the second least lonely state in the US with low divorce rates and a low percentage of the population living alone. Hawaii also had the lowest search volume for online dating apps—are you lucky enough to find love on the beach like that?

Top 10 least lonely states in the US

While New York is one of the least lonely states, it’s also one of the most expensive places to live. Folks may want to team up to help pay rent: 30.5% of New York’s population lives alone.

But, no matter where you live, you don’t have to be alone (just be cautious about the virus!).

Helping fight off the loneliness

The pandemic takes its toll on everyone’s social lives, but folks living alone, divorced, or looking for love may feel more isolated than ever.

Reach out to your friends, family, and acquaintances, even if it’s just to say hello on the phone or online. Remind them other people care about them. You never know what difference a simple gesture can make during these lonesome times—you might even find yourself a little less lonely.

We ranked each US state based on the factors below:

The loneliest states in America