US Cities with the Lowest Cost of Living 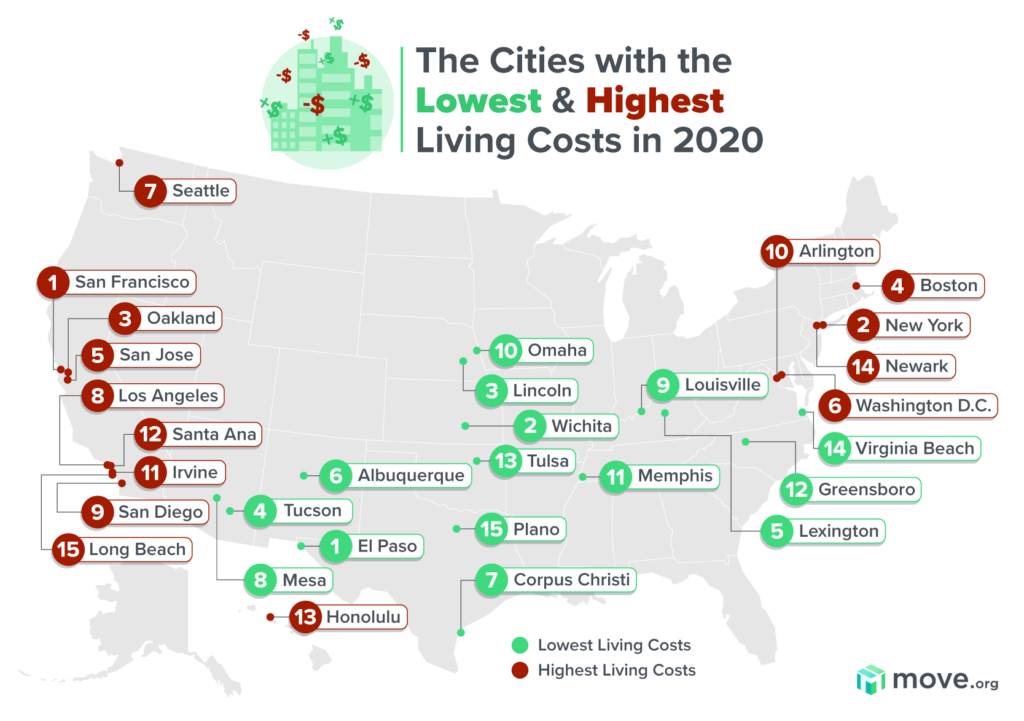 Between the turbulent economy and the ongoing COVID-19 pandemic, it’s safe to say that just about everyone’s life has changed in 2020. For many people, this upheaval is financial, and so some are looking for more affordable places to live. If this is your situation, then we can help you find a new city where you can make rent more easily.

Move.org researched things like rent prices, utility costs, gas prices, and internet rates in the 75 most populous US cities to learn which are the most affordable.

Keep reading to learn which US cities have the lowest and the highest costs of living.

Cities with the lowest and highest living costs

15 cities with the lowest cost of living

15 cities with the highest cost of living

Check out our Best Moving Companies of 2021 guide that our moving experts put together after researching professional moving companies across the country to determine the ones that can make your long-distance move the most organized, easy, and stress-free as can be.

The 15 most affordable cities in the US

We’re starting off our list of the most affordable cities with El Paso, one of three Texan cities that made it into our top 15. While some of El Paso’s monthly costs were about average compared to the other top 15, the city’s rent prices were the lowest of any we looked into, solidifying its spot as the most affordable city in the US.

At number two in our rankings, Wichita is the only Kansas city to make it onto our list of the 15 most affordable cities. While Wichita’s fuel and food costs were actually lower than El Paso’s, the city’s utility and rent prices were a bit higher.

Lincoln is so affordable that we’ve written about it more than once. The city also made it onto our list of the most affordable cities for minimum wage earners, a feat that no other cities in this list could pull off because of how low their minimum wages are set.

Though it has the highest utility, internet, and rent prices we’ve mentioned so far, the average monthly living costs in Tucson are still under $1,500. This makes Tucson a great destination for anyone looking for an affordable desert locale.

Do you love horses? Well, Lexington is one of the best places to live if you want constant access to racetracks and horse farms. In fact, Lexington is home to the International Museum of the Horse. The best part is that Lexington’s low cost of living means you’ll have plenty of money to go see the races with.

While it’s probably best known as the place where Bugs Bunny constantly misses his left turn, Albuquerque is also one of the most affordable cities in the country. Unfortunately, it is the first city on our list where monthly costs break $1,500.

If you’re looking for an affordable beachside city, then look no further than Corpus Christi. The city sits alongside a beautiful bay and has several popular beaches. While beaches near cities in California and Florida might be a little more famous, Corpus Christi’s affordability makes it an excellent choice for beach lovers on a budget.

If you want to live near Phoenix for the great job prospects but Phoenix’s $2000 cost of living takes it off the table (la mesa, get it?) for you, then consider living in Mesa instead. Mesa is much more affordable, and it only takes about 20–30 minutes to get to the heart of Phoenix in good traffic.

Louisville is the most populous city in Kentucky, and it’s also one of the largest cities in our top 15. This makes it a great option if you want to live in a bigger city but don’t want to pay as much as you would in a place like New York City or Los Angeles.

Omaha has the lowest unemployment rate in the US. Pair this with the city’s affordability and its prominence in the manufacturing and shipping industries, and Omaha is clearly one of the best cities if you’re looking for work and you want to live in America’s heartland.

Most people know Memphis as the home of Elvis Presley. The King’s mansion, which has been converted into an Elvis museum, makes Memphis a popular tourist destination for musicians and lovers of rock ‘n’ roll. If you want to live in the city where the King lived and recorded his music, the price of doing so is actually incredibly cheap.

With the smallest population of any city in our top 15, Greensboro is a great place to move if you want to live in an affordable town that isn’t too large. The city’s rent prices are lower than some of the other cities we’ve talked about, but its average food costs are higher than any other city in our top 15.

Like Lincoln, NE, Tulsa is a city we’ve actually written about before. The city ranked number eight on our list of the best cities for first-time homeowners. If you’re looking for your first home in this tumultuous economy, you can’t beat Tulsa’s home values paired with its affordability.

While Virginia Beach makes our list of cities with the lowest cost of living, this ranking does come with one important caveat. The city’s low minimum wage puts it among the least livable cities for minimum wage earners. If you make minimum wage, we recommend picking one of the other cities we’ve mentioned instead of moving to Virginia Beach.

We started our list in Texas, and that’s where we’re ending it too. While Plano’s living costs are high compared to the other cities we’ve mentioned, they still beat the rest of the US cities we looked into. This means that Plano is still a great option if you’re looking for an affordable city to move to.

If you’re serious about moving to a more affordable city, then there’s no time like the present to start researching moving companies and gathering price estimates. Check out our list of the best moving companies to find a mover that meets your needs and fits within your budget.

To get our rankings, we analyzed living costs in the 75 most populous cities according to the U.S. Census Bureau.1 To gather the prices for rent, utilities, internet, food, and fuel, we used Numbeo.com.2

To calculate monthly fuel costs, we multiplied Numbeo.com’s fuel prices in each city by the average car’s fuel efficiency3 and the average number of miles driven by Americans.4