How Much Does It Cost to Move?

Put simply, moving costs vary. The final price of your move will depend on a number of considerations:

Because there are so many variables at play, we can’t offer a definitive amount you should expect to pay. We can, however, offer price ranges for common moving scenarios to give you a general point of comparison.

If you’re ready to start getting quotes, check out our list of the best moving companies.

Our free move concierge can help you cut costs

There’s more to moving than getting your belongings from A to B. If setting up insurance, internet, utilities, or home security services while planning your move makes you hyperventilate, we’ve got an answer for you!

Move.org offers a free, all-in-one solution that provides you with a personal concierge who will assist you in setting up all those services (and more!). From finding the best mover in your area, to forwarding your mail to your new address, our moving concierge removes the hassle of self setup and helps you save money.

Your personal preference will dictate how much of the moving responsibilities you’d like to take on yourself.

Do you want to pack your own boxes? Do you want to personally load and drive the truck? Or would you prefer to sip a cool glass of lemonade on your front porch and watch professional movers take care of those tasks for you?

A lot of those answers will hinge on the amount of free time you have and the amount of effort you’d like to exert during the course of your move.

Regardless of your preference, your budget can often be a much larger determining factor in whether or not you opt for a DIY move, a full-service move, or a hybrid of the two.

Read on to see the most commonly asked questions about moving price and learn how these costs can impact your moving budget.

How much does a full-service move cost?

Full-service moves generally fall in three different categories: local (usually under 100 miles), long-distance (100+ miles), and international. Depending on the size of your home and the number of additional services you select, the cost of your move will fluctuate.

If you’re planning a small apartment move, your costs will be on the lower end of the spectrum. Moves for larger homes will require budgets somewhere in the upper portion of our price range. 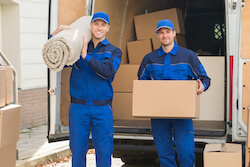 Here’s what you can expect to pay on average.

Full-service movers assist with a whole lot more than simply loading your belongings onto the truck and driving everything to your new home.

Although it’s a more costly moving option, the amount of time and effort they save you in the moving process is well worth the investment.

How much does a moving pod cost? 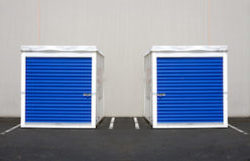 Moving and storage containers—often called moving pods because of the company that popularized them (PODS or Portable On Demand Storage)—are generally less expensive than full-service movers.

Although there are fewer variables involved to determine your moving pod cost, it will still fluctuate based on the size and number of moving

containers you need, how long you’ll need them, and how far you’re moving.

Most moving and storage container companies offer quick estimate tools on their websites, but here’s a brief look at how reserving a moving pod will affect your budget.

The price averages below cover everything from renting a single, small moving container to renting enough containers to move a large home.

Even though you generally have to load your belongings yourself when you rent a moving container, you still get to relax when it comes to driving. Whether or not the cost savings are worth the sweaty afternoon of loading your own containers is up to you.

If you are willing to put in the work, however, renting a moving container is less expensive than a full-service move and offers a level of convenience that a truck rental move can’t match.

Save 10% on your moving container move

How much does it cost to rent a moving truck?

Renting a moving truck is often the default choice if someone wants a DIY move. Moving trucks are relatively inexpensive, readily available, and easy to reserve.

Despite the apparent cost benefits, however, extra fees can cause your moving truck rental price to climb higher than you might expect. 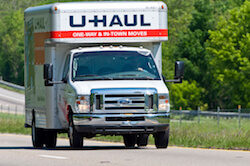 Our local price average below reflects the range of prices for renting small trucks, medium trucks, and large trucks for moves under 100 miles.

The long-distance average, on the other hand, illustrates the cost spectrum for moves over 100 miles, and it also includes prices for multiple truck sizes.

Although truck rentals are generally the least expensive options for your move, they are also the most time and labor intensive.

Spending an extra couple hundred dollars on renting a moving storage container or hiring a full-service mover can save you a lot of time, alleviate some unnecessary stress, and help you avoid aggravating any achy joints you might have.

If saving money is your primary objective, however, renting a moving truck will certainly help keep your moving costs low.

“40.8% of Americans say their moving estimate was the same as the final price of the move.”

This alarming statistic means that nearly 60% of customers have seen their prices change from the original estimates that moving companies gave them. Remember, if your estimate isn’t binding, there’s always a chance the price of your move could go up (even on moving day).

Unfortunately for 54.4% of the people we surveyed, a good full-service move usually costs significantly more than $1,000 (especially if you also pay for a packing service), and we’ve seen prices as high as $29,000. On average, full-service moves cost $9,060.

It’s no secret that some moving companies offer discounts for cash payments, so paying for your move with cash can save you money. Unfortunately, paying with cash isn’t always possible for some people. According to our data, almost 60% of movers have to use other payment methods to cover their moving costs.

“Only 20% of Americans have used a storage container or moving pod for their move.”

Using a moving container company like U-Pack, PODS, or SMARTBOX to service your move has a lot of benefits, one of which is that it can be a bit cheaper than going with a more traditional moving company. However, according to our statistics, most people still go with full-service movers or DIY moves instead of using moving containers.

Let us help you find a mover

Written by
Colin Holmes
Colin Holmes is no stranger to moving: he’s done so five times in the last five years, and he’s used his expertise to help over 185,000 readers plan their moves in the last year alone. As a former journalist and documentary interviewer, Colin brings a wealth of research experience to Move.org.
Read More