If you’ve visited Move.org before, you’ve probably noticed that International Van Lines (IVL) is one of our most popular and highly rated  moving companies. IVL is especially known for providing comprehensive national and international transportation services and world-class customer care.

So it is no surprise that our moving grant recipient, Jim, chose IVL to handle his long-distance move from Oceanside, California to Grass Valley, California in May. A retired semiconductor executive, woodworker, and cyclist, Jim was looking for “gentle, prompt, and convenient” moving help when he selected International Van Lines to assist him in his move to a more desirable location for him and his wife, Lisa, to enjoy their retirement.

Unfortunately, things did not go quite according to plan.

From miscommunication with the van line and costly unplanned expenses to residential and furniture damages, Jim and his wife had a frustrating experience with International Van Lines. We’re here to break down what happened and help you avoid a similar encounter if you decide to work with IVL.

Want to see what a move with IVL would cost you?

Get a Quote
Move.org Moving Grants: The 411 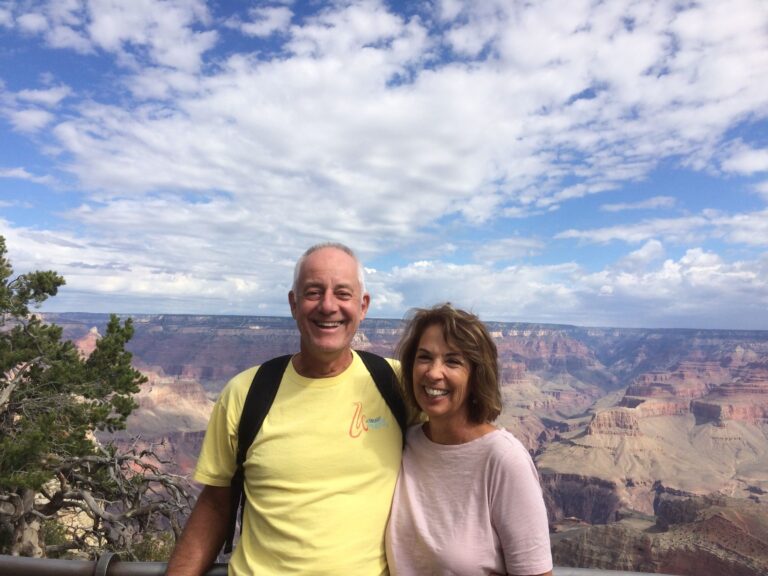 Outdoor enthusiasts and retirees Jim and Lisa looked forward to laying down roots in their new Grass Valley home.

New retirees, Jim and Lisa, were excited to move from their residence in Oceanside, California to their ideal home in Grass Valley, California. After doing some online research and finding many positive reviews , Jim contacted International Van Lines for a quote. He was so impressed with the IVL agent’s professionalism and expertise that he chose not to contact any other moving companies for estimates.

Don’t forget to shop around

In the same way you might receive more than one estimate for expensive car repairs or home renovations, it’s smart to get multiple quotes from moving companies for your long-distance move. Most reputable moving companies determine transportation fees by weight. Others charge based on the total volume of your shipment. Then they factor fuel, origin/destination services, etc. So the best way to get cost-effective rates is to ask for multiple quotes!

For Jim, the choice ultimately came down to the first impression. He appreciated that he found countless positive reviews from former customers on the internet. Jim’s first conversation with his coordinator, though, is what really convinced him to choose IVL for his move.

The coordinator was friendly, upbeat, and knowledgeable about all aspects of the move process. It was his expertise and clear communication that truly sold Jim on IVL’s services—and the couple chose to look no further.

What to expect with International Van Lines—Pricing

Unexpected charges are an unfortunate (but not necessarily uncommon) occurrence across long-distance moves. So what exactly caused Jim’s move to exceed his estimated price by almost 20%?

Jim received an initial quote from his coordinator to move their things from their 2,975-square-foot home in the amount of $6,984, estimated at the rate of $5 per cubic foot.

What is considered a bulky item?

IVL defines a bulky item as any item that “cannot be stacked on top of or beneath.” Special, extra large, or awkwardly shaped items like a treadmill or canoe are harder to move and cost extra.

Their pricing included transportation (fuel and labor), an origin and destination fee, a charge for bulky articles, and an early booking discount.

Most moving companies offer both a standard transit protection (or insurance) plan and a full-value protection plan to their customers. The first is provided at no additional charge to the customer, while the second option is usually based on the customer’s valuation (or estimation of their belongings’ worth) and net weight of the shipment—and is a bit pricier. The benefit? It ensures that a moving company has more responsibility  in safely transporting your belongings. For more information, check out our moving insurance guide.

When and how Jim paid IVL

Jim was required to submit an initial deposit of $1,772 by credit card before the move took place, about 25% of the total cost.

The day prior to move day, Jim received an email from IVL advising that he would be required to pay $2,441 via money order, cashier’s check, or cash when the loading crew arrived the next morning.

On move day, the crew arrived and discovered that Jim and his wife had several belongings they wanted to send that were not on the initial inventory list. For this reason, Jim also incurred a $1,500 charge for the extra pieces and added cubic footage. He was required to pay this amount on the same day, via personal check or cash.

The remaining balance of $2,771 was due before Jim’s shipment could be delivered the next day, which was processed by credit card through an online payment system. 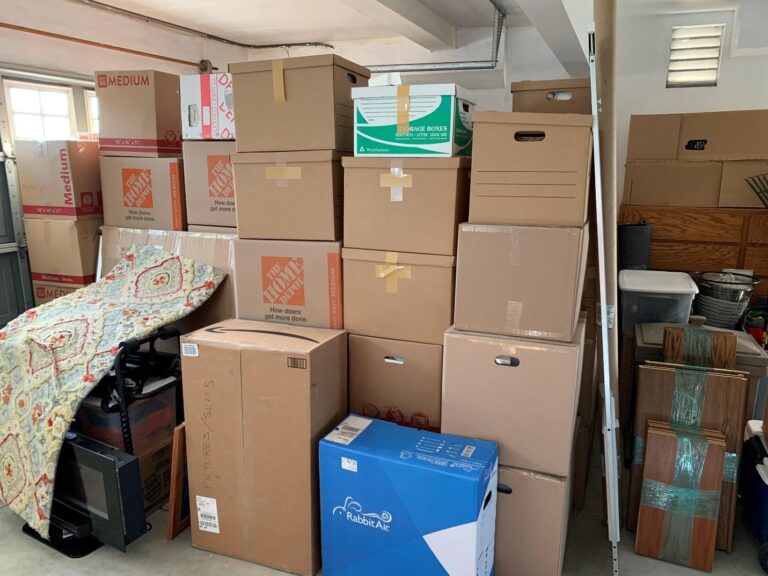 Jim made sure to prepare well for the movers, packing all of his belongings into small boxes in his garage in order to maximize his cubic footage and ensure easy loading.

Last-minute items can be costly

A moving company commonly performs walk-throughs prior to a move so it can provide an accurate estimate to the customer based off the shipment’s total weight and cubic feet. So if the movers arrive on move day and you’ve decided to purchase additional items—or ship things you’d previously planned to get rid of—you are probably going to be looking at some pretty expensive last-minute fees. A driver can even refuse to take your shipment if they are worried the overage won’t allow them to continue on their planned route (where they may have to pick up additional shipments).

How does International Van Lines compare to other long-distance moving companies?

While Jim and Lisa chose not to pursue additional quotes from other carriers, IVL’s pricing is in line with the industry standard. Most reputable moving companies  determine their transportation fees and associated costs by weight and cubic feet, and IVL is no different. Additionally, you can expect to see added expenses with most companies if you exceed the weight and/or space outlined on your contract.

If you’d like to learn more about how much it should cost to move, check out our guide.

What to expect with International Van Lines—Customer service

Anyone familiar with moving knows that customer service can be what makes or breaks a move. And in this case, communication played a significant role in the issues Jim encountered during his move.

Initially, Jim’s move coordinator was a clear, confident, and approachable communicator. He was able to view Jim’s home using Zillow to confirm the moving truck’s access, and he performed a virtual walk-through (or survey) of Jim’s home to confirm all the things Jim planned to move.

The coordinator and Jim agreed on May 30 as the pickup date, which the coordinator again confirmed two days before the move on Friday, May 28. The coordinator provided Jim with the name of the origin agency, Socal Moving Enterprises, Inc., and discussed the moving crew’s non-negotiable arrival time (between 8:00 a.m. and 12:00 p.m.). He made sure to mention that if Jim decided to send additional items outside of those listed on the pre-move inventory, the charges could change.

The first communication hiccup occurred when the crew arrived that Sunday. Because offices are usually closed over the weekend, it was impossible for Jim to go over the additional charges for his move with his coordinator. Instead, he discussed it with the Socal Moving crew and quality control manager. Understandably, this was a very confusing, stressful, and expensive last-minute situation to resolve on move day!

While Jim noted that all the crew members seemed to be friendly and hard-working people, he was not thrilled with how they handled his furniture and home—from irritating inventory stickers placed directly on top of high-value wooden furniture to rental property damage like chipped walls and base molding. He was also surprised that the crew didn’t use protective materials throughout the house during the loading process. 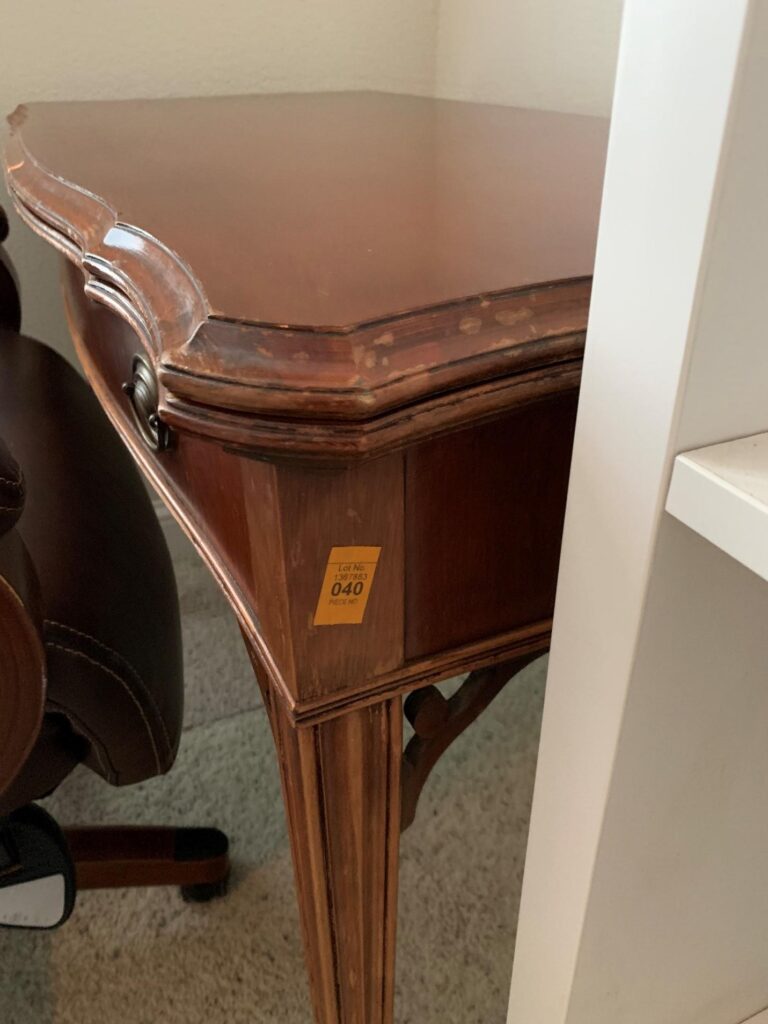 Jim was not aware that the loading crew planned to use adhesive stickers directly on his wooden furniture, as pictured above. 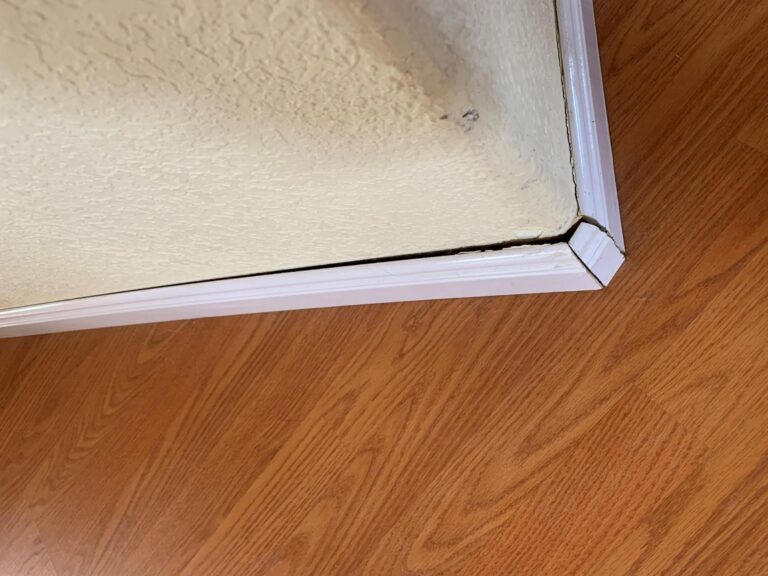 The crew made several damages to the couple’s rental property, including the pictured damage to the base molding.

Finally, Jim mentioned that the moving professionals made some messy mistakes disassembling his furniture and removing trash after loading. The crew was careless with the screws for disassembled furniture, randomly placing them into used cardboard tape rolls, not the labelled Ziploc bags Jim provided. He also found screws scattered across the floor. This made it hard for Jim to figure out which furniture the screws belonged to.

After the movers drove away, Jim was forced to pick up trash and moving debris the crew left behind before departing for his own nine-hour drive—which did not make for the smoothest start to a road trip!

Debris removal is usually included in your full-service move, even if you did not pay for packing. Make sure to ask about this before your movers leave!

Delivery, unfortunately, was not much better. When the delivery crew opened the truck to begin unloading Jim’s goods, they discovered heavy boxes had been placed on top of lighter, more fragile ones and on top of unprotected furniture. It’s easy to imagine, then, the damages that occurred to Jim’s fragile belongings and high-end furniture during transit. 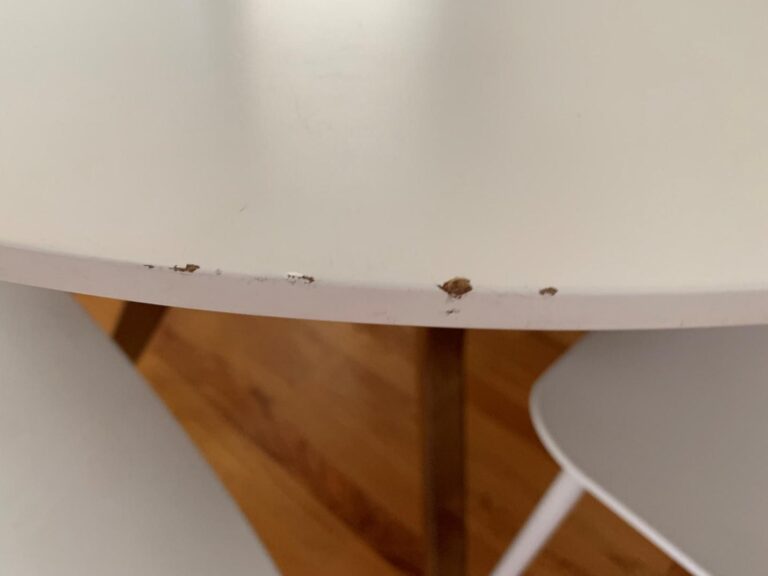 One of Jim’s tables that was damaged during transit.

Deposits are not uncommon: Moving companies will most often require deposits during peak season (late spring through early fall), though not always. Be wary of companies asking for large deposits exceeding 25% of the total cost of your move before your move has taken place, especially outside of peak season.

Weekend moves can be tricky: It’s best to try to move on regular weekdays to ensure your move coordinator is in the office. That way if you have any questions or concerns about charges or damages, you can receive immediate attention.

What surprised us about International Van Lines

We were shocked to hear about Jim’s experience, especially because of IVL’s well-documented history of positive reviews and customer feedback. A few things that stood out to us:

As you can probably imagine, Jim was less than satisfied with his overall experience with International Van Lines. Between the miscommunication regarding things like the crew’s arrival time and last-minute charges, and the severe property damage, the couple was extremely disappointed in their move with IVL. Jim provided us with a 1 out of 5 star rating and confirmed that he would not choose to use International Van Lines again in the future.

While we agree that Jim and Lisa’s experience was an unpleasant one, it would be difficult to completely discount IVL's proven history of delivering world-class customer care and moving services. Mistakes happen, and we are hopeful that Jim’s experience provides an opportunity for growth that benefits future customers.

Looking for more information about International Van Lines? Read our full review. Or you can request to speak directly with a moving professional at IVL regarding your own personal moving concerns today.