From moving trucks to moving and storage containers, U-Haul rents out just about every piece of moving equipment you could need for a DIY move, and this also includes moving trailers.

But how are U-Haul’s moving trailers? Are they more affordable than the company’s trucks? And, perhaps more importantly, do they have enough room for everything you need to pack inside?

We wanted to answer these questions, so we helped a family move from Arizona to North Carolina using a U-Haul trailer. We’re happy to report that the move went off without a hitch (aside from the trailer hitch) and the trailer was perfect for this move. However, that doesn’t mean a U-Haul trailer would be ideal for every move. Keep reading to learn more.

Want to know how much a U-Haul trailer will cost for your move?

In October of 2020, Christen and Carlos Ruiz were looking to move from the small town of Mohave Valley, AZ to Winston-Salem, NC. Their move was mainly motivated by a desire to live closer to Christen’s family, particularly her grandmother and great-grandmother.

The Ruizes were moving out of a 400-square foot converted garage, so they didn’t have a ton of stuff to pack up and take across the country. They also had two cars. This made a moving trailer the best option for them since it meant they wouldn’t have to pay for more space than they needed and they would both be free to drive one of the cars instead of having to drive a truck. 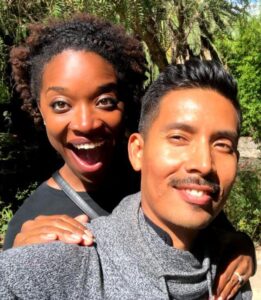 Why the Ruizes chose U-Haul

There were two main reasons the Ruizes went with U-Haul for their trailer rental: familiarity and availability.

U-Haul has always been Christen’s first choice whenever she’s moved, and she knew what to expect with U-Haul. Additionally, U-Haul was the only moving company that offered trailer rentals close to the Ruizes’ home.

This meant that the Ruizes couldn’t get quotes from multiple companies, a step we always recommend if it’s possible. While it requires a little extra legwork on your part, gathering multiple quotes ensures you’re getting the best price available.

Of course, since U-Haul was the only trailer rental company around, the Ruizes actually did get the best price available. However, their price might have been lower if U-Haul had more competition in their area. 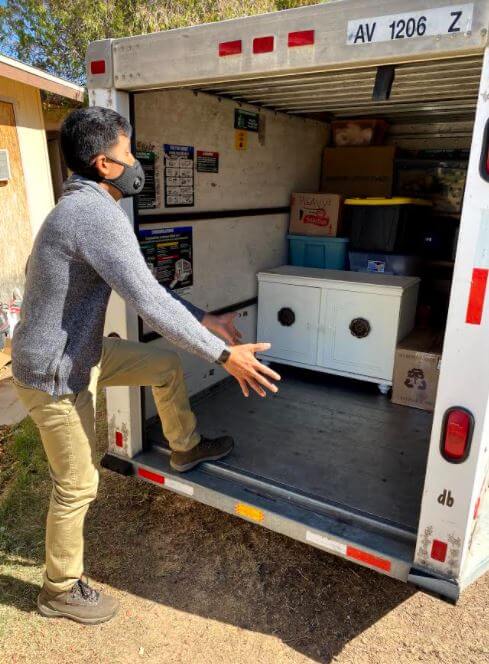 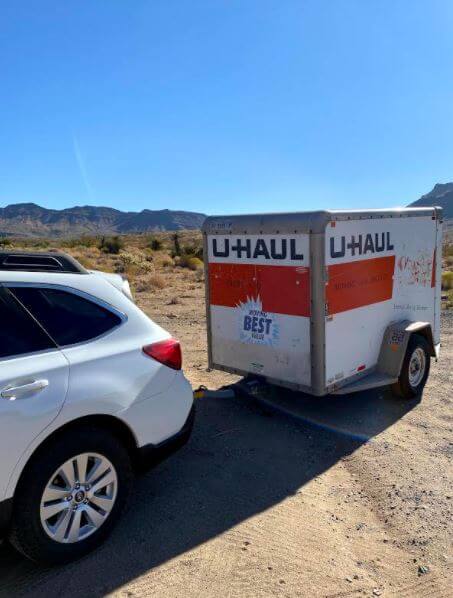 U-Haul’s availability is actually one of the best reasons to go rent from the company. U-Haul is basically synonymous with moving itself, and U-Haul retailers are just about everywhere. This means that no matter where you’re moving to or from, you can almost always find a nearby U-Haul retailer where you can pick up or drop off your rental.

Our U-Haul trailer move at a glance

Depending on the season and where you’re moving, U-Haul can be one of the most affordable options around. That said, their rates sometimes run higher than competitors like Budget.

We want to highlight that U-Haul’s initial quote to the Ruizes perfectly matched their final price: $416.96. This was a pleasant surprise since U-Haul often hits customers with last-minute fees that could have been made clearer before they signed their contracts.

For example, the customer we helped move with U-Haul’s U-Box did get hit with an unexpected delivery fee for his containers.

Renting a moving trailer instead of a truck can save you a whole lot of money, but it requires that you take only the essentials. If you can’t bear to part with your luxurious sectional, your canopy bed, or your antique armoire, you should probably just bite the bullet and rent a moving truck.

The Ruizes rented a 5-foot by 8-foot trailer for a 7-day and 2500-mile journey. These trailers have about 200 cubic feet of storage space inside.1

For comparison, U-Haul’s 10-foot moving truck (the smallest size) has 402 cubic feet of storage space.2 While double the storage space might seem nice, the truck rental is much more than twice the price. When we requested a quote for the 10-foot truck rental with the same pickup and dropoff locations as the Ruizes, our quoted price was $1,782.

So, renting a trailer saved the Ruizes over $1,000, but they did have to downsize substantially before it became a realistic option for them. Like we’ve mentioned, they didn’t own a ton of stuff to begin with, but they still had to sell most of their big furniture before their move.

Even if you’re going to rent a moving truck or hire a full-service mover, we still recommend downsizing as much as possible to save some money. If you need some helpful tips for offloading your belongings, check out these guides:

Overall, the Ruizes’ customer experience with U-Haul left very little to report. There were no last-minute fees, the staff was helpful and friendly, and the Ruizes’ trailer was ready where and when they had it reserved for.

While customer service can always be better (no one ever says no to a friendly, “under-the-table” discount), a boring customer service experience is a whole lot better than the horror stories customers report about some companies.

In short, there was nothing exceptionally good about U-Haul’s customer service, but since there was also nothing wrong, we’ll take it.

What surprised us about moving with a U-Haul trailer

Here are a few things—good and bad—we learned you should watch out for if you decide to rent a moving trailer from U-Haul.

When they first went to pick up their trailer, the Ruizes were worried they had made a mistake. From the outside, the trailer looked far too small to hold everything they needed even after they had sold most of their big furniture.

When they gave it a college try, though—packing creatively and using every inch of space—they were pleasantly surprised. It turned out that the trailer was just deceptively small on the outside, and they were ultimately able to get all of their remaining belongings to fit.

The bad things about this move weren’t actually U-Haul’s fault, but they’re worth mentioning.

First, U-Haul allows you to rent trailer hitches for your car if you want, but the Ruizes found a better deal from a third-party hardware company. Unfortunately, there was an error at the store and the Ruizes were sent the wrong hitch. With just a week until their move, they had to scramble to get the right hitch.

Luckily, they were able to find the hitch they needed from another hardware store three days before their move, so everything worked out. However, if you’re on a very tight schedule and you can afford to pay a little extra, we recommend just renting your hitch from U-Haul to avoid unforeseen problems like this.

The other bad surprise came at the gas pump. Hauling a trailer can greatly lower your car’s gas mileage, especially if you’re driving over mountainous areas like New Mexico (which the Ruizes had to drive through). Over the first leg of their journey, the Ruizes were shocked by how much they had to refill the gas tank of the car hauling the trailer.

If you’re going to rent a trailer for your move, you should plan refueling stops more frequently than you normally would and make sure there is room in your budget for extra gas.

While the Ruizes’ gave their U-Haul trailer move five stars on our survey, the limited storage space makes trailer rental an unrealistic option for most moving customers. However, if you can downsize enough to make it work or you don’t have much to move anyway, renting a U-Haul trailer is one of the cheapest ways to move.